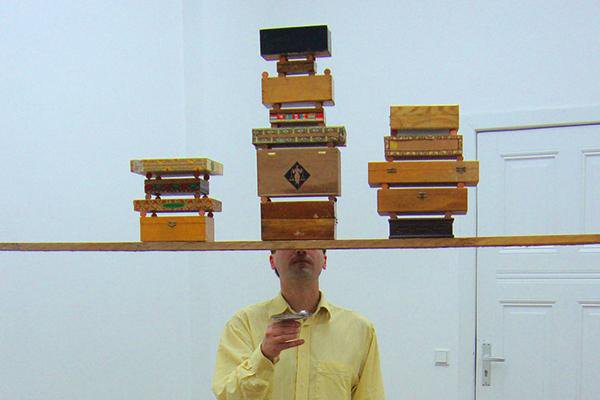 With the festival ACTS, art moves out of its usual exhibition space and instead utilizes the city, its various possibilities and public spaces as a stage. The festival kicks off with traffic, church bells and construction noise, forming a composition when the audience is guided through the sounds of the city by the artist Andreas Führer (DK). In Roskilde train station, seven women will perform Andrea Geyer's (US) work Comrades of Time, a performance where the political present is put into play from texts of the 1920s Weimar Republic. Brett Bloom & Bonnie Fortune (US/DK) call for public debate concerning the climate in the streets of Roskilde with their analogue powerpoint presentation.

ACTS 2014 has a continued focus on experimental sound performances.The program provides an intimate mini opera by the composer Niels Rønsholdt (DK) and a media-archaeological music theater by the composer and scientist Morten Riis (DK). Other works revolves around sound art practices that have a movement and materiality associated with the performance. The artists Tobias Kirstein and Claus Haxholm (DK) will explore the small nooks of the museum as physical labor men, in a performance where transfers of limestone, white noise and drones will stretch across time and space.

A range of conceptual performance works are also presented in the program, all characterized by the lack of any kind of reason. Kerstin Cmelka (AT) plays with stagings of fiction and reality in a performance where the soap opera meets the talk show. In Kirsten Pieroth's (DE) work a rubber dinghy is gradually inflated by an accordionist playing a harmonica, while Francesco Cavaliere (IT) investigates an old mysterious game, where the player is taken away from reality to an abstract communication with oracles. The mystery is maintained in Leif Elggren's (SE) sound performances revolving around the Swedish theosophist Emanuel of Swedenborg.

Part of the program emphasizes performance and sound art in Scandinavia under the name Nordic Acts. The Nordic "actions" can be found in the entire program, but a small portion has been concentrated on Saturday evening. In the lounge, cellar and concert hall of the music venue Gimle, you can experience Arendse Krabbe (DK) transform into a living organism, a sound performance where Siri Landgren (SE) produces digital sounds with the human voice. Örn Ámundason (IS) presents a performance lecture, where he examines the true meaning behind Nirvana's lyrics and Kurt Cobain's importance for future generations.

ACTS 2014 is curated in collaboration with Judith Schwartzbart, Rasmus Holmboe, Sanne Krogh Groth, all of which are associated with Performance-design at Roskilde University and museum director Sanne Kofod Olsen.