I am not you. Kintera presents his memorial to Jan Pup Bouchal - a cycling activist who died on the road - and On One's Own Volition, which he created beneath the Nuselsky bridge for the people who had committed suicide there. Both were created to mark a specific form of dealing with the notion of memorial, monument, and utilization of the public space. 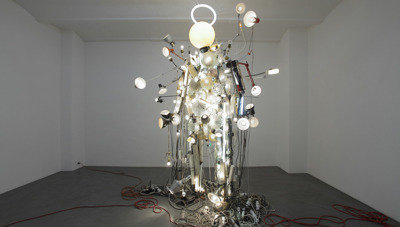 Museum Tinguely presents, from June 11 until September 28, 2014 the artist Krištof Kintera, who was born in Prague in 1973. The exhibition, devised in close collaboration with the artist, aims to present Kintera’s work in Basel in such a manner that its spontaneity, the artist’s complexity and dedication are conveyed to visitors.

Krištof Kintera is present in the city profile of Prague with his memorial to Jan Pup Bouchal, a cycling activist who died on the road, which stands at a busy traffic axis; or in the memento mori On One’s Own Volition, which he created in 2011 beneath the Nuselsky bridge for the people who had committed suicide there. Both memorials were created at the initiative of the artist and his friends, and thus mark a specific form of dealing with the notion of memorial, monument, and utilization of the public space. It is not the state and its authorities upon which exclusive sovereignty over the public space is to be conferred, but the individual and groups are also to make themselves manifest and be able to unfold both an aesthetic and a political effect.

Krištof Kintera entered the Academy of Arts in Prague in 1992. This was the year when – three years after the fall of Communism – the federal state previously described as Czechoslovakia was divided into the independent states of the Czech Republic and Slovakia. Kintera finished his training in 1999 at the Prague Academy after study stays in the USA and the United Kingdom. Subsequent to that, for three years, he dedicated himself intensively to dealing with theatrical and performative formats. With Jednotka/ Unit, he has been part of a theater group since 1993, and he has put on various performances with this group: in theaters (in 2001 he designed the set of a non-verbal performance bearing the title, Passanger); on the street (in 2002, actors walked around the city as Talkmen, talking robots wittering collected thoughts). During the same period, from 1999 until 2001 he was co-founder and artistic director of the alternative multicultural center UNIVERSAL NOD. A study stay in 2003–2004 at the Rijksakademie van Beeldende Kunsten in Amsterdam marked an end to the performative work. However, the urge to get into the public space and for social relevance remains fundamental in his works. Indifference is not an option for Kintera.

Kintera’s sculptural and drawn work developed during his time at the Academy. IT (1996) is a sculpture on rollers, shaped like an egg or computer mouse, the size of a dachshund, which is to be pulled through the exhibition space or the city on a string. IT is a work that can interact: with its assistance, the person pulling it along is bound to experience further interactions /encounters with passers-by. This is a ‘conversation piece’ of a new kind, claiming the public space for its own the way a dachshund, or a children’s toy pulled along on a string, would do it. The only thing is, with IT, we’re talking about art…

A similar game with the question of art was played by Kintera in 1997 with Appliances, variously shaped electrical devices without function, but with connecting cable, sales box, operating instructions, and ergonomic handling. Placed on the shelf of an electrical appliance dealer, the appliances are neither conspicuous nor inconspicuous, but discreetly take their place among hairdryers, irons, and hand- held blenders. Kintera’s advance into the world of goods is full of irony and mischief.

Revolution was created in 2005, after Kintera’s stay in Amsterdam. While the Talkmen, which had been created from 1999 to 2003 as sculptures, were small human figures, barely a meter tall, that moved about and babbled, the Revolution figure – in exactly the same shape – but this time very mobile and vehemently and forcefully bashes its head against the wall. This revolution does not devour its children, but destroys its very self – and the world in which it stands.

Besides his sculptures, Krištof Kintera draws, creates paintings, makes portraits, takes photographs, films and sprays. In these works on paper – sketches, text notations, aide-mémoires, mottoes – magazine pages supplemented with notes and comments mingle with delicate drawings of sculptures and stenciled or stamped mottoes such as ‘Don’t think about money’, ‘You are not me’, or ‘I don’t want to have problems’. These are tersely stated, highly perplexing, but in no way banal phrases which, torn out of context, are able to open up entirely new planes of significance. It was out of a collection of such sheets that Kintera designed the exhibition’s catalog, which has been elaborately produced in the form of an artist’s book.

A similar function to that of the striking short phrases is assumed by Lay down and shine (2009), a streetlight that has been cut down and gleams on the lawn of the Museum’s park. The paradox that the destroyed light continues to shine is one thing – another is the fact that the manifest process of destruction is, in this case, inherently an aesthetic winner. Thus, suddenly, a candelabra can be transformed from urban furniture into a sculpture and a respected formal authority.

My Light is Your Life (model: Shiva Samurai 15kw / 50Hz) is a sculpture that Kintera designed for the first time as early as in 2009; he has re-created it for the exhibition at Museum Tinguely. This is a figure breathing with light, made out of bulbs and spotlights, which, besides brightness, also produces warmth, heat, and which seems to be in co-existence with the building in which it stands. When it lights up, it becomes a part of the room – and at the same time, it draws so much energy out of the room that the sculpture outshines all else. Shiva Samurai is an almost contemplative work…

Bad News from 2011, on the other hand, tackles everything head-on – be it problem or generally ‘the world’. Bent over a large drum, a horned figure with a long, occasionally curling and beating tail, in a black fur coat, huddles and listens to the news and music coming from a large radio set. There is nothing pacifying, peaceful in this whole arrangement; on the contrary, the world’s entire misery seems to amass around this figure which, in reaction to this, kicks the drum and hits the empty beer glasses with a stick.

Publication
The exhibition will be accompanied by a catalog in individual sheet form comprising documents and photos from the artist's workshop as well as an interview (in English) between Krištof Kintera, Roland Wetzel, Andres Pardey and the gallery owner Jiří Švestka. Each copy packaged in an individual handmade box.
Only available at museum’s book shop: 68 CHF, ISBN 978-3-9523990-7-1