Goetz Collection. The show brings together 15 works that explore this border between humor and offense, consciously crossing it at times. The audience laughs at physical actions or misadventures, and the situations created are largely devoid of moral content. 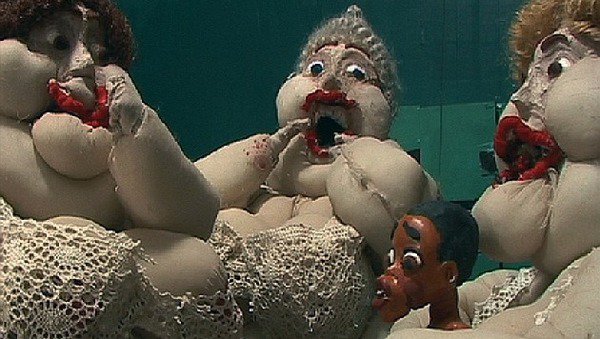 Each year since spring 2011, Haus der Kunst has presented two exhibitions of media art from the Goetz Collection in its air-raid shelter. The exhibitions are alternately curated by Haus der Kunst and the Goetz Collection. Part seven of this cooperative project is devoted to slapstick, comedy, and black humor - popular genres in the film and entertainment industries that allow viewers to laugh with impunity at others' misfortune. Humor offers psychological relief; it can, however, also offend political and ethical beliefs and hurt religious feelings. The show brings together 15 works that explore this border between humor and offense, consciously crossing it at times.

Slapstick is a special form of cinematic comedy that functions without words. The audience laughs at physical actions or misadventures, and the situations created are largely devoid of moral content. In a domestic setting, the stuntman in Julian Rosenfeldt's "Trilogy of Failure" performs activities such as making breakfast and sweeping up crumbs; he, however, enters the scene from above, by jumping through the ceiling, an action typical for his profession. He survives this without injury and casually brushes plaster dust from his sleeve. The double projection shows in eternal repetition a captured Sisyphus, who, with his fitness exercises, has destroyed the furnishings, including the walls, in order to then carefully clean or repair them.

A classic in the canon of physical mishaps is stumbling. Francis Alÿs presents a movement sequence in which a dog running across the street continually causes the same man to fall down. The scene is shot from different angles - from ground level, from a first-story window, from front, diagonal opposite positions, from the perspective of the dog, and from that of CCTV. The scene always ends the same way; the art critic and curator Cuauhtémoc Medina runs onto the road and imitates a film's clapper board by clapping his hands. He acts as a humorous reminder that this subject of an artistic work is unworthy - because it's trivial, banal, and it often appeared as a déjà vu.

While Alÿs's stumbler immediately gets up and continues, Paul Pfeiffer depicts football players whose various clashes with an opponent have consequences. The players fall, remain lying on the grass, and writhe in pain. The opponent is cut from the scenes so that the falling motion of the injured appears bizarre. The work's title, "Caryatid", is a metaphor. Like the Caryatids in Greek architecture, the actors carry a burden under which they, unlike the Caryatids, threaten to collapse. The viewer is faced with the morally charged question of whether it's okay to laugh at such scenes.

The popular film "The Way Things Go" by Fischli & Weiss, about a staged chain reaction of objects, is also slapstick. The objects are precisely positioned so that they fall over at a given moment, roll, slide, splash their contents, et cetera and, by nudging the next object, set off a series of chain reactions. The viewer recognizes situations from everyday life, in which objects develop lives of their own, but against their owners' wills. The comic element is also created by the fact that the normally hostile or malicious acts is expressly desired here and orchestrated with great effort.

John Bock's "Gute Stube" can be regarded as comedy. The instrument on which Bock toils appears in the credits as "Piano". It consists of three buckets, a bowl, and a pot that are attached - with their openings facing down - to a wooden keyboard arm. On this coarsely crafted piano, Bock wishes to play a fugue and conducts a running monologue. His claim, "The fugue has to fit into a trough and that can only be with a new composition!" proves impossible and generates frustration, which culminates in belligerent self-abuse. The musical presentation is acoustically and visually not without its charm; a hybrid of noise and sound from percussion, a keyboard instrument, and artistic performance.

Works such as "First" by Olaf Breuning or "Hungry Hungry Hippoes" by Nathalie Djurberg expand the selection of works to include black humor. They show encounters that are entertaining only for some of the characters. Breuning films five bored young men who go for a joyride; they stop a boy along the roadside, strip him, threaten him with golf clubs, and chase him across a field. The event borders on physical harm, and crosses over to mental abuse. Similarly, in Djurberg's piece, three fair-skinned dolls with rolls of fat and red mouths tenderly hug a small dark-skinned child to pass the time, but threaten to crush her. Through the soundtrack of clucking and farting sounds, the events, which resemble something between affection and abuse, become grotesque. This kind of humor thrives on cruelty and oppression, and demands that the viewer proactively decide to what extent the comedy is appealing as he or she rejects it due to its cruelty. Breaking taboos - here in the form of violence against the defenseless - is a popular strategy in the visual arts, used to move the viewer emotionally and, in so doing, to touch on socially relevant issues.

Laughter gets stuck in the viewer's throat and changes to dismay or compassion when other people are embarrassed or harmed. Such is the case with the title work, the video installation "Broken" by Tony Oursler. It shows a male doll whose head is stuck between chairs. The situation appears lifelike, especially because the tortured facial expressions of a living human being are projected onto the doll's face. It seems unnatural to laugh at the predicament in which the character finds himself. It just may be possible that laughter and compassion are mutually exclusive.

We would like to thank our shareholders for their annual support of the program: Freistaat Bayern, Josef Schörghuber Stiftung, Gesellschaft der Freunde Haus der Kunst e.V.