Centre Pompidou meets MAM. For this exhibition, 5 iconic installations from the 1960-70's were selected from the Pompidou's collection, most of them functioning in closed circuit, the video technology used today in security systems. 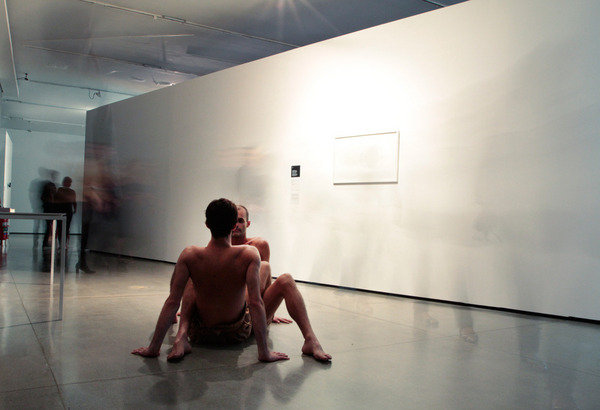 The exhibition Crossed circuits: Centre Pompidou meets MAM is the union of two relatively different collections: with the Centre Pompidou’s covering all artistic styles and works originating from different cultures – principally Western, but also Asian, South-American, and African – and spanning two centuries; and the collection of MAM-SP handling the modern and contemporary Brazilian scene.

For this exhibition, five iconic installations from the 1960-70’s were selected from the Centre Pompidou’s collection, most of them functioning in closed circuit, the video technology used today in security systems. These installations challenge the spectators in both the sensorial and intellectual dimensions.

Each of the six sections comprising the show is based on an installation – by Vito Acconci, Peter Campus, Dan Graham, Bruce Nauman, and Nam June Paik, as well as the commissioned work by Tony Oursler –, and establishes a relationship with contemporary works from the MAM collection from the 1970s to date; all fields and formats are combined.

Each section is surrounded by a cloud of keywords serving as a common language of intercommunication among the works. The selection of this system for establishing connections among the collections allows us to broaden our spectrum of reflection and dilute the borders separating the media included in the exhibition. Throughout the show, spectators will find words inscribed on the walls and be able to use them to weave their own webs of relationships.

This exhibition resulted from an intense dialog between two curators. In Paris, Christine Van Assche, chief-curator at Centre Pompidou; in São Paulo, Paula Alzugaray, freelance curator and editor. From the beginning of this exchange, spanning over two years, we saw the need to promote a joining of the collections, recognizing their particularities, their affinities and their differences. The political dimension of Crossed circuits consists of dialog – among institutions, countries, artists, media and generations – and the sharing of strategies and political cultures.