To a Lifetime of Meaningful Encounters

A collaborative project by Public Doors & Windows, an artist team based in Portland, which highlights the land of Le Cateau-Cambresis, the birthplace of Henri Matisse. The exhibition celebrates the lives and stories of local people and form. 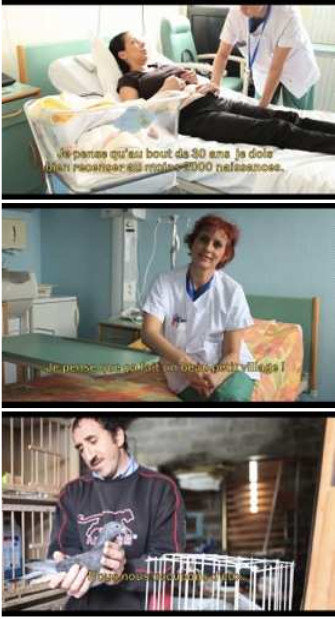 To a Lifetime of Meaningful Encounters (La vie est faite de belles rencontres) is a collaborative museum project by Public Doors & Windows, an artist team based in Portland, Oregon, which highlights the people and the land of Le Cateau-Cambrésis, France—the birthplace of Henri Matisse.

The Musée Matisse in Le Cateau-Cambrésis, a town of 7,200 in a rural area in the North of France, is in itself an extraordinary success story. Founded by the artist in 1952 with a gift to the town hall of some 80 works representative of his career, today the Musée Matisse is a full blown museum of modern art, housed in the 18th-century Fénelon Palace, and has grown through donations and dynamic public programs to be rated last year the "best museum in a small town" in France.(1)

Over the past year, Public Doors & Windows has been invited to engage the town's inhabitants and the local farming community through a series of participatory projects. First is a video documenting stories of the births of townspeople who, like Matisse, were born in Le Cateau-Cambresis, titled He came into the world in Le Cateau. Like me. The video will be projected outdoors for the duration of the exhibition, following the artists' desire to share the film with the local public and reach those who may not otherwise visit the museum. Inside, twenty "personal museums"—each dedicated to one of the film's participants—will be comprised of a personalised museum signage system and a curated set of objects that are significant to each participant. The exhibition will celebrate the lives and stories of local people and form a more reciprocal relationship between the town, the artists, and the museum.

Other participatory projects focus on the beauty of the farm land surrounding Le Cateau: a local choral group filmed in the fields surrounding the town, and a bilingual book for children illustrating a poem written by a local farmer, A Children's Book of Farming in Le Cateau-Cambrésis (Onestar Press, Paris). In the process, the museum staff viewed the permanent collection in a new light and rediscovered works on agricultural themes by modern artists—Pierre Bonnard, Marc Chagall, Marcel Gromaire, Jacques Villon, to name a few—which we will present for the first time.

When the Linden Blooms (Quand fleurit le tilleul)
At the invitation of Public Doors & Windows, artists Anne Daems and Kenneth Andrew Mroczek from Brussels contribute to the encounters with a project titled When the Linden Blooms, which takes as its point of departure the 48 linden trees aligned symmetrically in the museum's garden, the Parc Fénelon, designed on principles introduced by André Le Nôtre (1613–1700). Daems and Mroczek are creating a cyclical-environmental artwork, to serve as a metaphor for activating and interacting with one's own landscape, by collaborating with local industry and artisans. They've invited a local beekeeper to place beehives on the museum's balcony in proximity to the trees to produce honey for the duration of the exhibit, and are working with the local artisanal brewery, the Brasserie Historique de l'Abbaye, to produce a special edition "Bière fleurit au tilleul" that will combine linden and hop flowers to create a light summer beer to be enjoyed on linden wood furniture produced by a local manufacturer.

Harrell Fletcher has produced a variety of socially engaged, participatory projects since the early 1990s for museums and institutions all over the world. He is director of the Art and Social Practice program at Portland State University.

Nolan Calisch is an artist, photographer, and organic farmer with an interdisciplinary practice.

Anne Daems & Kenneth Andrew Mroczek are working collectively on When the Linden Blooms.

In her photos, videos and drawings, Anne Daems incorporates scenes of everyday life within urban and suburban landscapes. Her work often regards simple observations, which provide a brief glimpse into the interior of a subject's life.

Image: Excerpted from the film, He Came into the World in Le Cateau, Like Me. 2013