Departure, 2009-2011. The exhibition shows a poignant and imposing installation of boats made from bronze and iron which are evocative of long-forgotten shipwrecks. 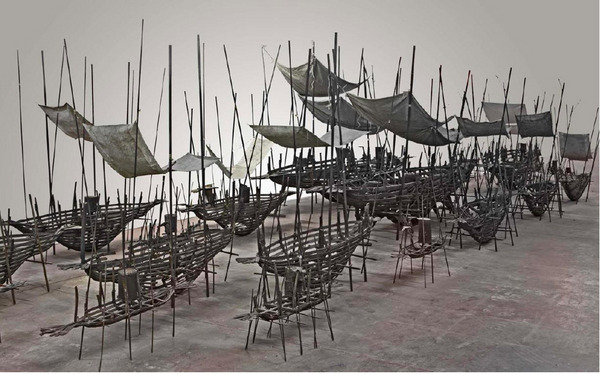 Mascaró, who lives and works in Madrid and Mexico City has exhibited in Buenos Aires, Los Angeles, Madrid, Mexico, New York and Paris and will exhibit a range of sculptural works showcasing his adventurous experimentation with traditional casting techniques.
Fascinated by the symbolism and iconography of boats - from the Egyptian funerary boats that took the departed on their eternal journey, to the recent exodus of people fleeing war, deprivation and poverty in the Mediterranean and South American regions, Departure will include a poignant and imposing installation of boats made from bronze and iron which are evocative of long-forgotten shipwrecks.

Alongside the installation, the exhibition will include arresting iron portraits of a young woman from Mascaró's Eleonora series reminiscent of the profiles on ancient coins, and delicate metal works resembling votive figures from his Idols series, which address cult imagery and veneration.

A highlight of this exhibition will be Xavier Mascaro's striking Guardians series, which is the first outdoor installation presented by the Saatchi Gallery since moving to Chelsea. These rusted iron warriors, nearly 10 feet high, are both imposing and placid, and are inspired by medieval armour and ancient Egyptian and Greek art. Previously exhibited at the Palais Royal garden in Paris and the Paseo del Prado in Madrid, they will be on view in front of the Saatchi Gallery throughout September and October.
Departure will run from 3 September until 5th October at the Saatchi Gallery.