The exhibition brings together artists who deal with the rural and presents their work in the center of a new capital city, yet one that lies in the middle of Anatolian rural culture: Fatma Bucak, Honorata Martin, Michal Lagowski, Krzysztof Maniak, R.U.T.A., Daniel Rycharski and Slavs and Tatars. 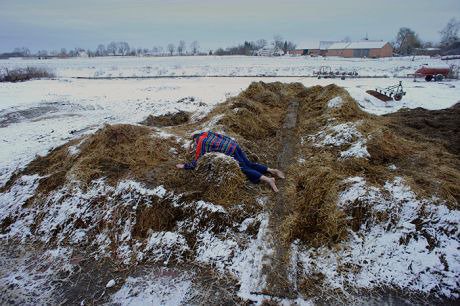 Just as rural populations began to move from the countryside to city centers in the aftermath of the industrial revolution, so have artists followed this trajectory, initially for education and then to produce, present and participate in the contemporary art circuit. Yet, recently, in countries like Poland and across Europe, this trend has to some extent reversed, with artists now often choosing to return to their childhood villages, intent on not needing the context, financial burden, and some would add homogeneity, of big-city life for the development of their practice.

With grassroots culture, craft, farming, ecology and the notion of "useful art" becoming increasingly analyzed and adopted in artistic practice, it also makes sense for many artists to focus their energy away from the pressure of institutional structures and the market. Such artistic expressions, which may contemplate or indeed exist as "contemporary folk art," can be considered in parallel with recent debates that focus on society's rural pedigree.

Following the demystifiction of bucolic images of the countryside, artists now help express the present and real challenges of modernising rurality. By rejecting patronizing and elitist avant-garde art strategies, "contemporary folk art" attempts to develop a new formula of rustic art creation. Artists emphasize their ties to the land, to nature, to specific communities, and to the rhythm of natural seasons – in that sense their works form an alternative to so-called new national art. This aesthetic is an artistic reaction to the character of modernity; never accepted in its pure form, it is absorbed only in tandem with tradition, ethnicity, and homeliness.

Into the Country brings together artists who deal with the rural and presents their work in the center of a new capital city, yet one that lies in the middle of Anatolian rural culture: Fatma Bucak, Honorata Martin, Michał Łagowski, Krzysztof Maniak, R.U.T.A., Daniel Rycharski and Slavs and Tatars. It is the first event in a four-month collaboration with the Museum of Modern Art in Warsaw, which explores artistic responses to spirituality and theology, culminating in an exhibition at SALT Galata and a series of events at SALT Beyoğlu in November.

The exhibition at SALT Ulus is curated by Łukasz Ronduda, Museum of Modern Art in Warsaw, in collaboration with SALT, on the occasion of the 150th anniversary of the abolition of serfdom in Poland.

The project is co-financed by the Ministry of Culture and National Heritage of the Republic of Poland, as part of the cultural program of the celebration of the 600th anniversary of the Polish-Turkish diplomatic relations throughout 2014.