Photography and Architecture in the Modern Age. The exhibition brings together over 250 works by 18 leading photographers from the 1930s to now, who have changed the way we view architecture and think about the world in which we live. 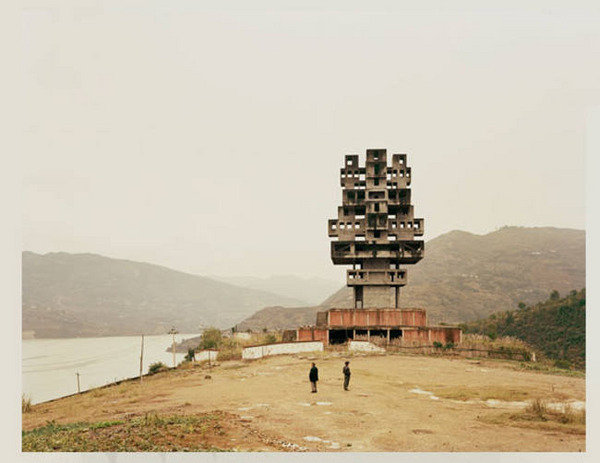 The exhibition is curated by Alona Pardo and Elias Redstone and designed by the Belgian architecture practice OFFICE KGDVS – architects Kersten Geers and David van Severen.

Since the very first photograph, architecture has proved to be an enduring subject matter for photographers. Constructing Worlds looks beyond the medium’s ability to simply document the built world and explores the power of photography to reveal wider truths about society. The exhibition brings together over 250 works – some rarely seen and many shown in the UK for the first time – by 18 leading photographers from the 1930s to now, who have changed the way we view architecture and think about the world in which we live. It opens at Barbican Art Gallery on 25 September 2014.

Constructing Worlds takes the visitor on a global journey of 20th and 21st century architecture, with highlights such as Berenice Abbott’s ground-breaking photographs charting the birth of the skyscraper in New York; Lucien Hervé’s subtle evocations of modernity as found in Chandigarh by Le Corbusier; the luxury lifestyle of Julius Shulman’s images of California’s residences; the moving nature of Daniel Libeskind’s Jewish Museum as seen by London based photographer Hélène Binet; the recent dramatic growth of Chinese urbanisation recorded by Nadav Kander and the devastating effects of war in Afghanistan as expressed in the poignant images of Simon Norfolk.

Jane Alison, Head of Visual Arts, Barbican, said: “Photography and architecture have a long and shared history and yet amazingly this is the first major exhibition in London to throw light on this relationship. Featuring leading photographers who between them have represented some of the most important architecture of the 20th century, the exhibition brings together two key strands of Barbican Art Gallery’s programme. It is a must see for anyone interested in how we understand architecture and equally the dramatic global shifts in society in the post-war period.
Since its inauguration in the early 1980s the Art Gallery has championed photography through important thematic and solo figure exhibitions including American Images: Photography 1945-1980 (1984); William Eggleston: Ancient and Modern (1992) and more recently In the Face of History: European Photographers in the Twentieth Century (2006); and Everything Was Moving: Photography from the 60s and 70s (2012). Our passion for photography continues unabated and we greatly welcome this new opportunity to showcase such an array of stellar photographers.”

Organised both chronologically and thematically, the exhibition opens with Berenice Abbott’s photographed project Changing New York (1935-1939) that captured the transformation of New York into a modernist metropolis, focusing her lens on the dramatic changes the city was undergoing with towering skyscrapers replacing older low-rise buildings. At the same time, Walker Evans was on assignment for the Farm Security Administration photographing the vernacular architecture of the Deep South which bore witness to the adverse consequences of modernity. In contrast, Julius Shulman’s photographs of the Case Study Houses programme (1945–1966) capture the experimental architecture and ideal modern lifestyle encapsulated in California in the 1950s. Le Corbusier quickly gauged the power of photography to communicate the essence of his architectural vision which was perfectly expressed in Lucien Hervé ’s cinematic documentation of Chandigarh – a modernist symbol of a newly independent India.

Reflecting on the legacy of Walker Evans’s objective documentary style and interest in vernacular architecture, which influenced a generation of photographers across the USA and Europe during the 1960s and 70s, the exhibition goes on to consider the works of Ed Ruscha, Bernd and Hilla Becher, Stephen Shore and Thomas Struth. Combining the cityscape of Los Angeles with the vernacular, Ruscha’s photobooks Some Los Angeles Apartments (1965) and Thirtyfour Parking Lots (1967) communicate a particular urban experience whilst the decaying industrial European landscape is the focus of Bernd and Hilla Becher’s comprehensive archive of arcane industrial archetypes. Stephen Shore’s explosive colour photographs from Uncommon Places (1973 – 79) and Greetings from Amarillo, “Tall in Texas” (1971) and the unsentimental street scenes of Unconscious Places by Thomas Struth all reference Evans’s nascent documentary approach, whilst reflecting on the repetition and banality which modernity can incite.

Considering photographers’ interpretations of and their response to architects and iconic buildings of the modern age is the focus of a section of the exhibition that reflects on the symbiotic relationship between photography and the architectural subject. Providing layers of narrative and injecting ancillary meaning to the physical space, these photographs offer a way of understanding the architects’ intentions in relation to the lived reality, as exemplified in Luigi Ghirri’s lyrical response to Aldo Rossi’s architecture; Hélène Binet’s studies of fragments of Daniel Libeskind’s Jewish Museum, Berlin; deliberately blurred photographs by Hiroshi Sugimoto of iconic 20th century architecture; Luisa Lambri’s exploration into the reality of inhabiting and living a modernist lifestyle in domestic Modern architecture; and the response to the impersonality of individual works of architecture in Andreas Gursky’s monumental photographs.

Constructing Worlds culminates with an exploration of cities experiencing dramatic changes, where the contemporary experience of the urban built environment is conveyed through Guy Tillim ’s exposé of late-modernist-era colonial structures in Angola, Congo, and Mozambique in the series Avenue Patrice Lumumba (2008); Simon Norfolk’s Chronotopia (2001) and Burke + Norfolk (2010) series, which show how the scars of the past are revealed in the architectural present; Bas Princen’s documentation of the urban transformation in the Middle East in Refuge, Five Cities (2009); Nadav Kander’s portrayal of the impact of colossal modern construction; and though the Torre David series by Iwan Baan, which captures an example of contemporary usurpation, adaptation and repurposing of architecture.

Building on the legacy of the Barbican’s iconic architecture and pioneering approach to curating photography, the Constructing Worlds season presents a constellation of projects that celebrate the interplay of photography, architecture and life – as well as creating new portraits of the Barbican for our time. With the exhibition exploring photography’s special relationship to architecture as its catalyst, the season also comprises a new commission in the Curve by the internationally acclaimed artist Walead Beshty; a dedicated film strand City Visions, focusing on the energy and complexity of global city living and follows our 2013 acclaimed Urban Wandering season; a brand new film commission and residency by Ila Bêka and Louise Lemoine, best known for their now legendary take on Rem Koolhaas’s Maison à Bordeaux, and the first of a changing series of displays devoted to the history and life of the Barbican.

Shooting Space: Architecture in Contemporary Photography, by Elias Redstone (Phaidon, September 2014) showcases work that asserts a critical relationship between photography and architecture. It presents a broad spectrum of approaches it to considering architecture in contemporary photographic practice - from Annie Leibovitz’s celebration of the construction worker to Nadav Kander’s documentation of immense infrastructural projects in China.

The exhibition is accompanied with a fully-illustrated catalogue published by Prestel with essays by Alona Pardo, Associate Curator at Barbican Art Gallery; Elias Redstone, curator of Archizines and author of Shooting Space: Architecture in Contemporary Photography; and writer and curator David Campany; as well as texts on all 18 photographers in the show. Price: £35, ISBN: 978-3-7913-6207-6

Events
The exhibition is accompanied by a rich programme of events, running from September 2014 to January 2015. Highlights include a series of ‘In Conversation’ events, including Stephen Shore and Gerry Badger; Guy Tillim and Mark Sealy; Simon Norfolk and Julian Stallabrass and others to be announced; as well as a series of exhibition tours with the exhibition curators and experts in the field of photography and architecture such as Owen Hatherley, David Campany, and Rachel Stevenson.

Also featured in the programme is Run, Jump, Shoot, a half-day workshop with a hands-on session led by freelance photographer Andy Day investigating the iconic architecture of the Barbican Centre through the photographic lens and professional parkour athletes. Architecture and Photography in Post-War Britain brings together curators Justine Sambrook and Valeria Carullo for an exploration of the varied strands of architectural photography in post-war Britain.

Supported by: The Graham Foundation for Advanced Studies in the Fine Arts, Embassy of the Kingdom of the Netherlands and part of the SA-UK Seasons 2014 & 2015