All 30 Mapplethorpe photographs from the Kinsey collection will be featured, along with materials that address the controversy surrounding the 1989 exhibition and the culture wars of the early 1990s. 'Still Life Photographs' (1997-2012) will feature over fifteen of the Letinsky's photographs that feature food and the remnants of domestic interactions with food. 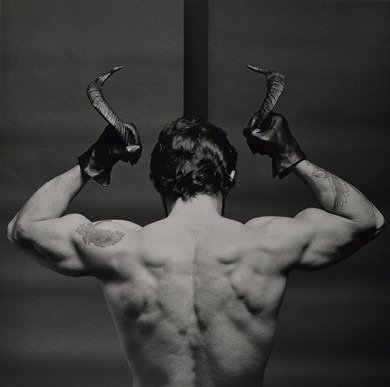 Mapplethorpe is considered by art historians to be one of the most significant artists of the 20th century. His striking black-and-white photographs capture a classical beauty that is both formal and raw.

In 2011, The Kinsey Institute received a gift of 30 prints from the Robert Mapplethorpe Foundation . These photographs dating from 1976 to 1985 are excellent examples of Mapplethorpe's more challenging work. Some of the gelatin silver prints are nude or clothed portraits, while others contain explicit homosexual and heterosexual imagery from the New York S&M scene.

At the time of the gift, foundation president Michael Stout described the works as some of the artist's "most memorable and most difficult." The Kinsey Institute was chosen to receive this group of photographs because of its scholarly mission and IU's storied record of academic freedom, Stout said.

On Oct. 10, photo critic Philip Gefter will deliver a lecture on "Robert Mapplethorpe, Sam Wagstaff, and the Gay Sensibility." The event will take place at 5 p.m. in Room 102 at the Henry Radford Hope School of Fine Arts. An opening reception will follow from 6 to 8 p.m. at the Grunwald Gallery.

Gefter writes about photography for The Daily Beast. He previously covered the subject at The New York Times for more than 15 years. Aperture recently published his book of essays, "Photography After Frank."

In 2010, Gefter produced the acclaimed feature-length documentary, "Bill Cunningham New York." His current project is "Wagstaff: Before and After Mapplethorpe -- A Biography," which will be published by W.W. Norton & Co. in November.

On Oct. 24, Andrew Moisey will present the gallery talk "Robert Mapplethorpe: Pleasure and Pain" at noon in the Grunwald. Moisey is a postdoctoral fellow at the Center for Cultural Analysis at Rutgers University.

Though Mapplethorpe is well known for a variety of subjects, including celebrity portraits and flower studies, his more explicit photographs have sparked a wider public dialogue.

In 1989, a retrospective of Mapplethorpe's work, "The Perfect Moment," helped ignite a fierce culture war after Republican Sen. Jesse Helms discovered that the National Endowment for the Arts had awarded the Institute of Contemporary Art in Philadelphia $30,000 toward the exhibition. A battle ensued over the government's role in funding for the arts.

One year later, the same exhibition provoked local law enforcement in Cincinnati, Ohio, to accuse Cincinnati's Contemporary Arts Center and its director of pandering pornography and promoting obscenity. A famous trial resulted in which the definition of art itself was the essential issue. Art and the exhibition prevailed, as all charges were dismissed.

"Robert Mapplethorpe: Photographs from The Kinsey Institute Collection" opens 25 years after the artist's death and the opening of "The Perfect Moment" retrospective. All 30 Mapplethorpe photographs from the Kinsey collection will be featured, along with materials that address the controversy surrounding the 1989 exhibition and the culture wars of the early 1990s.

The Mapplethorpe exhibition and related events provide an opportunity to examine changes in the social climate that may or may not have occurred over the past several decades. What lasting effects did the culture wars have on the public's perception of art? Did Mapplethorpe make the exploration of this subject matter more or less difficult for other artists? How does one determine what is obscene and what is art?

A companion exhibition, "Beyond Mapplethorpe," features images by photographers who either influenced his work or were his contemporaries in the 1970s and 1980s. The show of more than 20 photographs from The Kinsey Institute includes work by Tom Bianchi, George Platt Lynes, Len Prince, Bettina Rheims, Herb Ritts and Arthur Tress. Although these images may not be as overtly sexual as some of Mapplethorpe's photographs, they reveal the same interest in exploring and expanding the artistic possibilities of the human figure.

The Mapplethorpe exhibition and corresponding programs have been made possible by The College Arts and Humanities Institute in the College of Arts and Sciences, the Grunwald Gallery of Art , the Department of Sociology, and the Kinsey Institute for Research in Sex, Gender and Reproduction, all at Indiana University; the Robert Mapplethorpe Foundation in New York; Michael E. Rudder of California, and other private donors. Malcolm Daniel, photography curator at the Museum of Fine Arts, Houston, and Claude Cookman, professor in the School of Journalism at IU, were instrumental in acquiring these gifts to The Kinsey Institute from the Mapplethorpe Foundation.

Laura Letinsky: Still Life Photographs (1997-2012) is an exhibit of works by Chicago-based photographer Laura Letinsky. This exhibition will feature over fifteen of the artist's large-scale photographs that feature food and the remnants of domestic interactions with food. Using the table as the platform for these "still life" tableaux, Letinsky creates beautiful images that hint at the meals that existed before. Her photography has evolved from studies in melancholy and absence to subtle explorations of perception, color, and space. The soft light and delicate colors invite viewers to approach her work, where they discover unexpected shifts of scale and playful illusions of space. These qualities are most pronounced in her work from 2010-2012, where she abandons traditional concepts of space altogether, and chooses instead to tape, pin, or glue cutout images of food and other objects to large sheets of paper, which she then photographs.

An excerpt from Letinsky's artist statement: "Still life is unavoidably an engagement with and commentary upon society's material-mindedness. Laura Letinsky's photographs of forgotten details such as wrapping paper, plastic containers, Styrofoam cups, cans, leftover food bits, and found trinkets remark upon these remnants of daily subsistence and pleasure. But instead of the traditional allure of a meal awaiting an unseen viewer's consumption, Letinsky photographs the remains of the table so as to investigate the precarious relationships between ripeness and decay, delicacy and awkwardness, control and haphazardness, waste and plenitude, pleasure and sustenance. What is looked at is "after the fact," what (ma)lingers, what persists, and by inference, what is gone."

Laura Letinsky is a professor at the University of Chicago, Department of Visual Arts. She received her Bachelor of Fine Arts from the University of Manitoba in Winnipeg, Canada in 1986 and her Master of Fine Arts degree from Yale University School of Art in 1991. She has received grants from prestigious institutions, such as Anonymous Was A Woman Foundation, Richard Driehaus Foundation, and John Simon Guggenheim Memorial Fellowship. Past exhibitions of her work have been featured at the Canadian Museum of Contemporary Photography; Casino Luxembourg; Museum of Modern Art, New York; Nederlands Foto Institute; and The Renaissance Society, Chicago. Her work is featured in many collections including Art Institute of Chicago; J.P. Getty Museum, Los Angeles; Hermes Collection, Paris; The Museum of Fine Art, Houston, TX; and San Francisco Museum of Modern Art. She is represented by Yancey Richardson Gallery, New York.

This exhibit and corresponding programs were made possible by Themester 2014 and the Center for Integrative Photographic Studies at Indiana University. Laura Letinsky: Still Life Photographs (1997-2012) is part of the College of Arts and Sciences' semester-long initiative, "Themester 2014: Eat, Drink, Think: Food from Art to Science." Themester is a program that combines academic courses, public lectures and exhibits, film showings and other events and is intended to engage students and the entire community in a collective learning experience about a timely issue.

This traveling exhibition is organized by the Denver Art Museum and circulated by the School of Art Gallery, University of Manitoba, in collaboration with the artist and Yancey Richardson Gallery, New York.