In recent times, Brown, a highly expressive contemporary painter in active dialogue with the history of painting, has been contending with the genres of figurative study and the nude ensemble. 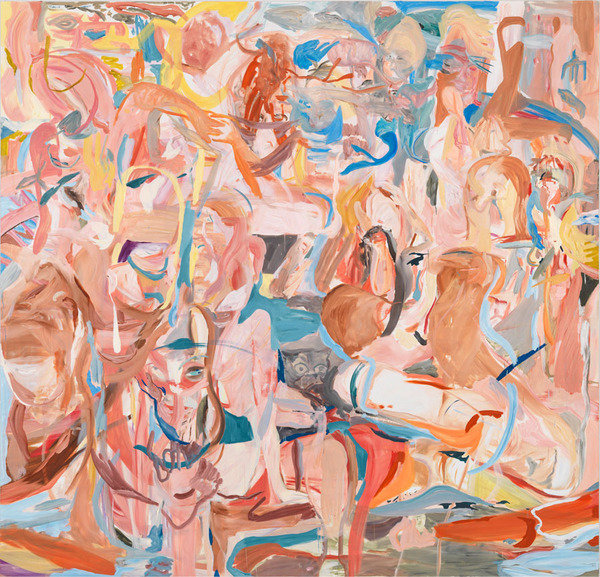 Gagosian Paris is pleased to announce an exhibition of new paintings by Cecily Brown. This will be her first solo exhibition in Paris.

In recent times, Brown, a highly expressive contemporary painter in active dialogue with the history of painting, has been contending with the genres of figurative study and the nude ensemble. In her visible grapple with formal concerns, she conceives each canvas as a compositional flux, compressing subject and background, and incorporating a palette of bright contrasting hues. Stylistically diverse nudes—some loosely suggested, others clearly identifiable—make explicit her aim of conveying images in a barely elusive shorthand. This approach results in encounters with figures whose fleeting nature makes their presence all the more uncanny, implicating the viewer as voyeur in the visual game of hide-and-seek.

Hinting at figurative subjects from Impressionist paintings, and formulating cryptic titles from incidental sources including song lyrics and magazines, Brown oscillates between palettes of fleshy pinks and cool, verdant greens; isolated and grouped figures rendered as solid or translucent; and physiognomical features fully defined or represented by inconclusive smears. By freeing inspirations from their original contexts, she subverts the role of narrative in the construction of genre, and points to the slippage inherent in quoting from source. For example, in Hollyhocks that aim too high (2013), Brown recasts the subjects of Degas’s painting Young Spartans Exercising (c. 1860) into a lush green setting where limbs and trees intertwine; while in Combing the Hair (Côte d'Azur) (2013), the intimate boudoir scene of the nineteenth century genre painting is reimagined as a sinuous jumble of bodies that deliquesce into pulses of pinks, yellows, and blues worthy of a Côte d'Azur idyll.

The exhibition is accompanied by a fully-illustrated catalogue with an essay by James Lawrence revised and expanded for this publication (French only).