Two video arranged into a cascade of short cuts and combined with pointy jingles, sound effects and reproductions of commercial products that make references to the technique used to dim its over-visibility down. 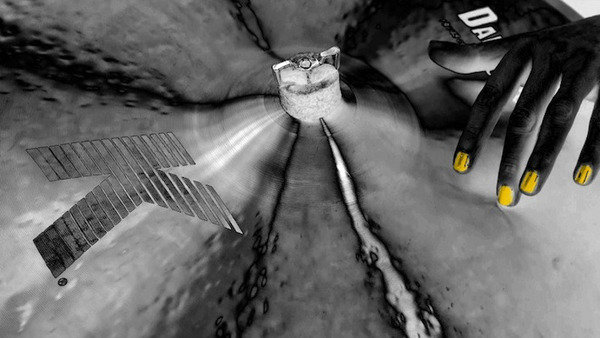 Elizabeth Price (b.1966, lives and works in London) is known for her formally tantalizing video collages featuring unconventional narrative structures. In her elaborated films, fast cuts, crisp sound effects and catchy soundscapes provoke ruptures in the narrative plots mostly based on documentary source material.
By precise successions of images or juxtapositions of divergent visual material she is capable of merging historically or geographically disparate imagery into a mesmerizing and highly allusive set of visual interdependencies. Elegantly she moves in between scientific causality, logical stringency and optical plausability.

Elizabeth Price's presentation at Kunsthalle Winterthur comprises two works. The Tent (2012/2014) is installed in a fully white interior, whereas Sunlight (2013) is framed by a darker setting in grey. The Tent is about a book called Systems, the focus of which was the so called British Systems Group: a group of artists in the early 1970s who devoted their visual language to forms based on system theory.
Sunlight is a two channel projection that takes thousands of diapositives as a starting point; they were made from 1875 to 1945, using for the first time what is called K-light, to make the sun's activity visible to the human eye.

They are re-arranged into a cascade of short cuts and combined with pointy jingles, sound effects and reproductions of commercial products that make references to the sun or the technique used to dim its over-visibility down. A lipstick appears as well as a nail polish and a drum kit. Short sentences as in commercials or tutorial films explain what is visually going on, but at a certain point they emancipate from any explanatory function and turn into autonomous slogans and statements.