Jorinde Voigt employs primarily the medium of drawing, using it to create her own realities and her own thought models. Jeremy Shaw employs the obscure form of Kirlian photography to record a series of experiments for testing the unseen visual effects of popular American music. 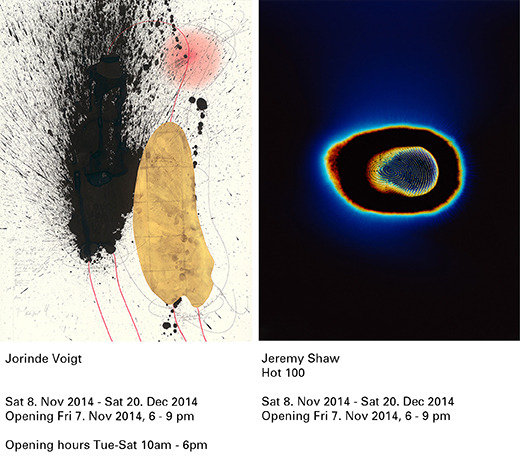 Johann König, Berlin is pleased to presen the work of the Berlin-based artist Jorinde Voigt (b. 1977, Frankfurt-on-Main) in this, her first solo exhibition in the gallery.

In order to visualize her complex experimental set-ups, Jorinde Voigt employs primarily the medium of drawing, using it to create her own realities and her own thought models. Her mainly large-format compositions cannot be unequivocally categorized as figurative or abstract pictures; moreover, what appears at first to be a systematic conception seems always to expand into the gesticular.

Deploying a method that she has gradually developed over the past eight years, the artist tries to turn experiences, thoughts, conceptualizations or also associations derived from music, literature or philosophy into visible form and to site them in a system representing movements and spatio-temporal contexts. The subject material involved in her work is highly subjective, revolving more around forms of perception and processes of apprehending than around the objects as such. Voigt’s works unfold their particular appeal through their dovetailing of the meticulous and the impulsive, the orderly and the chaotic, the scientific and the poetic. Linear and hand-written elements have, for some years, been augmented by an increasing number of coloured surfaces made of a variety of materials. And now, in addition, Voigt is transposing her compositions into the sculptural sphere.

The title of the series A Difference That Makes A Difference refers to a definition of the concept of 'information'(1) formulated by the anthropologist Gregory Bateson and stands as it were symbolically for the work-process of composition, which is concerned with the multifariousness of form-giving devices. Central to the process is an almost aggressive hurl of flung ink, which the artist calls a 'splash', and which spreads out over the sheet of paper in a liberating impulse, leaving behind it an intuitively created trace that is uncontrollable and irreversible. This spontaneous modus operandi, in complete contrast to Voigt’s meticulous writing, was first practised in the pieces that formed the Archetyp [Archetype] (2011) series. In the next step, Voigt draws in outline the fundamental form of the created splash in an act of conscious yet associative apprehending. The form, which is now executed as an intarsia – Voigt cuts the surface out, gilds it and subsequently re-inserts it – thus functions both as the shadow and as a making conscious of the splash. While in her works on literary and philosophical texts the coloured and metallic intarsias serve to make visible what has been intuitively grasped from the texts, here in A Difference That Makes A Difference the understanding of an act takes place within the picture itself. The artist’s choice of material is not intended to arouse associations of pure quality or high value. What interests her rather is the autonomous character, the wellnigh immaterial non-colour of gold. Depending on point of view and incidence of light, the surface colour changes and reflects its surroundings – a characteristic that is simultaneously immanent in the reflective act of form-giving.

In the step that now follows, the whole is embedded in the notational web of lines and writing which the artist calls the 'matrix'. A variety of spatial parameters – axes of rotation and lines of egomotion (self-movement) – and their temporal counterparts locate the forms in an ostensibly objective system leaving the beholder a wide variety of options as to how to envisage the movements, future developments and past states of the individual elements. In addition, fine pencil lines give information concerning the construction process and the way in which the separate elements are functionally connected, and a red dot, rubbed in with circular movements of pastel pigment forms a dense 'focus' rotating at high speed. In a final step, Voigt draws red lines – which she calls 'Now' – over the composition as a documentary tracing of her overall picture creation process.

In the series Settings (Erstarrungen) [Solidifications], the lead-created objects transpose the 'splash' as it were into three-dimensionality. Not only is a formal similarity discernible, but the process by which the objects are created is based on an act of impulsiveness similar to that of the 'splash': with a sweeping movement, the artist flings liquid lead, boiling at 400°, into cold water. The lead solidifies, forming complex, unpredictable, but profoundly sensuous shapes, which retain the vigorous, bold sweep of their creation. In this elementarily physical process, two aspects of Jorinde Voigt’s work are superimposed on one another – a spontaneously created chaos and its conscious mapping. Here, it is the beholder who creates the system of the matrix: he or she determines the movement and rotation of the object while walking around the works.

The twelve large-format sheets coming under Position + Inkommunikabilität – Grüne Treppe [Position + Incommunicability – Green Stairs], bring together a range of elements from Jorinde Voigt’s oeuvre and can be read as an ongoing sequence. Here again, all of the forms involved are located within a drawn and written 'matrix'. The 'splash' is to be found not just as one form among many but at times as a background covering the entire sheet. Covered in gold, white gold or copper, the intarsias mark positions that Voigt creates by laying parts of her body on the sheet and subsequently tracing the outline of the impress. Thus there can be no simplistic distinction made here between 'representational' and 'non-representational': the positions bring together both modes of perception plus the performative process of creation all in one. While in the group of works entitled Inkommunikabilität [Incommunicability] (2014) the drawn body positions – which make their first appearance here – were linked together by convolved fields of movement coiling into themselves, in Position + Incommunicability – Green Stairs these fields in part hover autonomously in the drawing space, no longer referring unequivocally to specific positions. They are now accompanied by forms which emerged as spontaneously evoked inner images during the reading of literary texts and which for the artist body forth the essence of her memory of the texts in question. In the case of Position + Incommunicability – Green Stairs, these forms are tubular in shape – tubes, separate or bundled together, and again worked up as intarsias, from which a diffused, coloured light radiates out in the form of clouds of pastel pigments. These shapes came to Voigt during the reading of a city portrait by the Italian writer Italo Calvino. In his depiction of the city of Isaura in the novel Le città invisibili [Invisible Cities] (1972), Calvino describes an imaginary city that is supplied from a subterranean lake by a system of tubes and pumps. The tubes in Voigt’s compositions, however, do not point in any direction; nor again, like the staircases – reminiscent of M. C. Escher – which are likewise worked up as intarsias, do they join up two unambiguous points. Rather, they symbolize the abstract idea of a transformer – a changer and transporter of energy.

While looking at Jorinde Voigt’s works the beholder becomes immersed in a highly individual system of perception, one that, as it were, both exerts a fascination and makes highly taxing demands. Contemplative and focused, still and yet untrammeled at one and the same time, Voigt’s thought models call into question any notion we may entertain that we have unequivocal, univocal processes available for grasping and understanding our culture and the world around us.

In Transcendental Capacity (Billboard Hot 100s), Jeremy Shaw employs the obscure form of Kirlian photography to record a series of experiments using himself as the basis for testing the unseen visual effects of popular American music. Kirlian photography is a contact-based process used to capture the phenomenon of electrical coronal discharges that naturally occur around objects – considered by some to be their aura.(1) In complete darkness, Shaw listens through headphones to specific Billboard Hot 100 charts – the definitive list of a single year in American pop music (in this exhibition: 1969, 1984, 2001, 2008). At a certain point during each song, he places his index finger directly on an unexposed piece of Polaroid land-film situated on the copper plate surface of a Kirlian camera device and ignites a high voltage charge from within it - sending an electric shock through the film and into his finger. The process captures a photographic image of both his fingerprint and the unseen electrical coronal discharge that exists around it at that given moment in time, serving as a visual translation of each song’s mediation through his body and its effect, if any, on his aura.

Also on view is the most current version of This Transition Will Never End (2008 – present) – Shaw’s ongoing archive of appropriated footage taken from a wide variety of movies and television in which a vortex, or any such tunnel-like or spiraling image is used to represent the slippage of time or a transition from one reality to another. This constantly updated work serves as a catalogue of the varying styles and techniques used to create this commonplace depiction of the ubiquitous phenomenon that remains as-of-yet, impossible to document.

(1) Discovered in 1939 by Russian inventor Semyon Kirlian, the technique was introduced into Western scientific research during the 1970’s, but quickly abandoned due to its inability to remain stable within regulated scientific parameters. Although discarded by traditional science, the process is still used within fields of parapsychology, fringe science and various mystical practices.

Jeremy Shaw (b. 1977, North Vancouver) works in a variety of media to explore altered states and the cultural and scientific practices that aspire to map transcendental experience. Often combining strategies from the realms of conceptual art, documentary film, music video, and scientific research, Shaw’s work has addressed topics ranging from psychedelic drugs, hypnosis, and brain imaging, to straight-edge hardcore, serpent handling, and time travel. He has had solo exhibitions at MoMA PS1, New York; Schinkel Pavillon, Berlin; and MOCCA, Toronto. He has been included in group exhibitions at Stedelijk Museum, Amsterdam; KW Institute for contemporary art, Berlin; and Palais de Tokyo, Paris. Work by Shaw is held in public collections worldwide including the Museum of Modern Art, New York, and the National Gallery of Canada.