The Exhibition of Walter Swennen focuses on the last three decades of the artist's career and brings together over 130 works on paper in a variety of media. Testa Matta presents new series of works by Alessandro Pessoli dedicated to Fortunello, an imaginary Dadaist character. 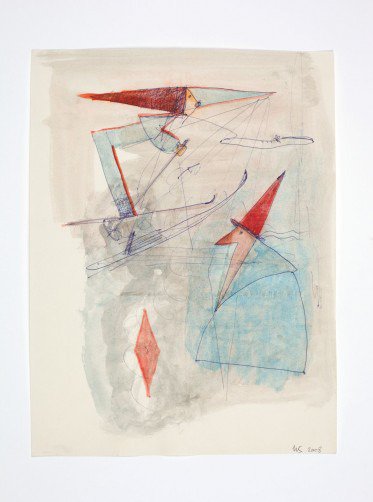 Xavier Hufkens is proud to present a new exhibition dedicated to the graphic work of Walter Swennen (b. 1946, Brussels). The presentation focuses on the last three decades of the artist’s career and brings together over 130 works on paper in a variety of media.

Walter Swennen is a painter and a draughtsman in equal measure. While his works in oil often engage with the complex questions inherent to the art of painting – its potential and limitations; what, why and how to paint – his works on paper can be read as the laboratory that not only fuels his ideas, but also points to possible answers. Like his paintings, Swennen’s sketches take the form of enigmatic compositions of recognisable elements: words, letters, pictograms, heraldic devices, strip cartoon figures, advertising slogans, geometric forms, animals, stereotypical characters and everyday imagery. Although this gives rise to obvious visual correspondences between certain paintings and drawings, and a sketch might form a springboard for a larger work, his graphics are always autonomous creations. Often executed in layers and in mixtures of pencil, ink, watercolour, pen or crayon, they can be viewed as a visual compendium of ideas, insights, discoveries, juxtapositions and associations.

Modest in scale (often no larger than the page of a standard sketchbook), humorous and bursting with life, Swennen’s joyful graphic inventions nevertheless point to a greater conceptual significance. To define what they are, it is often easier to state what they are not: they do not attempt to accurately represent anything, be it a person, place, situation or thing; nor are they abstract or expressionist; they are not studies of isolated objects, nor evocations of inner emotional states. They do not open up onto a three-dimensional pictorial space that can, figuratively speaking, be entered. In other words, they are not mimetic. Instead, they can be read as complex mental constructions in which images and meanings, ideas and language overlap, intersect or converge.

A poet and philosopher before becoming an artist, language plays a vital role in Swennen's oeuvre. Not only does he incorporate text in his work – blocks of words, individual letters, brand names and sentences – but he also combines it with other visual elements that suggest a ‘puzzle’ or rebus. Occasionally, letters and images coalesce into a clearly identifiable play on words or phonetics; at other times, they merely allude to a potential ‘answer’ that might (or might not) be hovering just beneath the surface. In this sense, they are a form of visual poetry, a vehicle for specific observations and experiences of the world. And therein lies the intrigue. Each of Swennen’s drawings is a poetic distillation of the beguiling complexity, but essential simplicity, of not just art and language, but life itself.

Xavier Hufkens is pleased to announce the exhibition of a new series of works by Alessandro Pessoli.

Painter, sculptor, filmmaker, draughtsman and printmaker: Pessoli is a true polymath, an artist in love with materials and every conceivable form of expression. Comprising painted ceramics and bronze sculptures, works on paper, ceramic tiles, painting and film, the myriad forms and mediums in Testa Matta not only bear witness to the artist’s fertile imagination, but also to the truly interdisciplinary nature of his practice.

Testa Matta – which means ‘madcap’ or ‘screwball’ – is Pessoli’s second solo show with the gallery. Central to the exhibition is Fortunello, an imaginary Dadaist character created by the Italian actor and playwright Ettore Petrolini (1884-1936). Based on a cartoon character, and hinging on slapstick, parody and nonsense, Petrolini’s semi-mechanical performances as Fortunello captured the attention of the Italian Futurists. Marinetti described the character as ‘the most difficult to analyse of all Petrolini’s masterpieces’. Deeply engaged with both history and art history, Pessoli uses Fortunello as the springboard for a poetic, personal and richly layered visual essay on the themes of culture, identity and about what it means to be an artist.

Fortunello is brought to life – quite literally – in a stop-motion film entitled Autorittrato Petrolini. The work is based on a short film of Petrolini performing as Fortunello in 1915. To create the work, Pessoli projected the original clip onto a canvas: as the film rolled, he started painting. Drawing upon a wide range of media and tools – oils, acrylics, tempera, airbrushes, stencils, pastels, pencils, rollers, spatulas and rags – he painted the 1,000 frames of Autorittrato Petrolini on a total of seven canvases. Each frame of his film corresponds to a change in the painting, which the artist then photographed. There is no other post-production: the animation is simply the result of editing the photos in sequential order.

Fortunello’s song is almost untranslatable: it is a nonsense rhyme. The actor attempts to describe his own personality in words that slip into repetitive, contradictory phrases. The character of Fortunello is almost a hundred years old but, for Pessoli, he embodies several fundamental truths: not just about Italy and art, but about himself. In this sense, the work can be regarded as a self-portrait, a meditation upon the Italian character, or as a statement of identity. Yet Autorittrato Petrolini also touches upon more universal themes. This ‘moving painting’ spans the history of twentieth-century Italian art and includes references to Futurism, Surrealism, metaphysical art (pittura metafisica), Novecento Italiano and European pop art. It can thus also be interpreted as reflection upon Italy’s history, particularly during the Fascist era, as well as the emergence of modernism and its legacy. A related film, I Salamini, is based on a Petrolini song of the same title (1918) and shows the artist dressed as Fortunello.

Testa Matta also includes a recent series of amorphous figures and busts, some rendered in bronze, others in painted ceramic. The largest and most complex of these comprises four busts separated by thin, spray-painted canvases hung from iron tripods. Pessoli’s installation can be read as a loose interpretation of a classic portrait gallery in both two- and three-dimensions and is as much a paean to free-expression as it is to Petrolini/Fortunello, or the different images and modes of representation that are embedded in Western visual culture. What appears, at first glance, to be a collection of incompletely rendered portraits and rough-hewn plinths is, in fact, a sophisticated exercise in composition and juxtaposition. The dynamic contrasts between the heavy, malleable clay and the nebulous airbrushing, the surface textures, colours, materials and techniques radiate with vital energy. Pessoli’s characters are arranged as though engaged in a conversation, albeit one that takes place in separate ‘rooms’: whichever way you approach the installation, it can never be viewed in its entirety; there is always the awareness of the figures on the ‘other side’.

In addition to a recent film and a suite of drawings, Pessoli will also be exhibiting two new series of prints: unique silkscreens on fabric and a collection of monoprints.