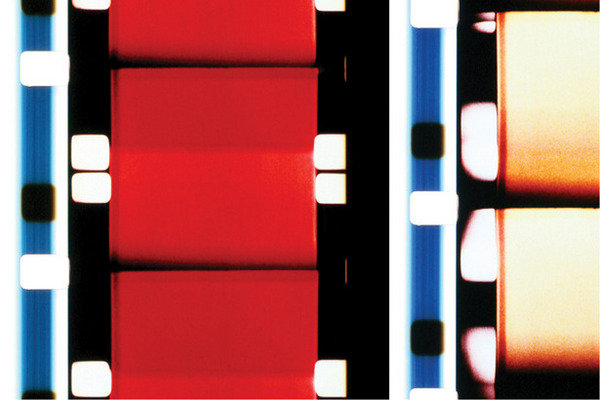 Working with precisely composed 16mm films, the American experimental filmmaker Paul Sharits (1943–1993) created extraordinary cinematic spaces characterized by a degree of complexity and density that is unique in the history of art. In his installations and multiple projections (locational film pieces) he transforms film not only into a deeply visual, but also a profoundly physical experience. Meticulously arranged colour compositions (Shutter Interface, 1975), deceptive film-in-film presentations (3rd Degree, 1982) and abstract sequences interrupted by graphic images (Epileptic Seizure Comparison, 1976) form the basis for his reflections on the functions and conditions of the medium of film. Sharits’ work masterfully combines a sense-penetrating intensity with reflections on filmic illusion and the mechanisms of seeing.

In his Frozen Film Frames, he reduces film to its essential components, causing it to freeze into sculpture floating in space: Between suspended Plexiglas panes he mounts strips of film arranged side by side in such a way that they can be viewed both vertically and horizontally. Sharits reduces film to its essential components, celluloid and light, thereby divesting it of its fundamental determinants, namely time and motion.

Analogous to his cinematic pieces, Sharits continues to experiment with analytical and rhythmic colour composititions in numerous graphic works. In his diptychs and series executed in felt-tip on graph paper he places studies alongside the films, thereby creating a film notation that is entirely his own. In the early 1980s Sharits turned his attention once again to the roots of his art and thus to painting. Here as well, he was concerned primarily with the function and conditions of the medium and abstract compositions alternate with graphic representational works.

For the first time ever, the Paul Sharits retrospective unites four film installations (locational film pieces) within a single exhibition. In addition to single-screen projections, various Frozen Film Frames and numerous drawings, the show presents his late paintings as well as a number of previously unexhibited works. The Fridericianum is pleased to present the world’s first comprehensive retrospective devoted to the art of Paul Sharits.

A catalogue will be published by the Verlag der Buchhandlung Walther König. In addition to articles by Paul Chan, Tony Conrad, Birgit Hein, Bruce Jenkins, Branden W. Joseph, Helen Marten, Jonas Mekas, Susanne Pfeffer and Melissa Ragona, the publication will also feature essays on film theory by Paul Sharits, some of which have never been published before, and an extensive catalogue raisonné.

The films, photographs and installations by Eric Baudelaire (born 1973) investigate the very framing conditions of historiographical narration. How do the production processes underlying a film image, a story, a portrait or a document themselves shape the reality they depict? By mobilizing and using the hidden framework of media devices, templates and ideologies with which we construct history, present and future and in staging them within the frame, Baudelaire creates fictitious documentary and documentary fiction. Here, a document turns into a framed picture, a film improvisation collides with the exhibited film script, a documentary film portrayal does not show portrait images of those portrayed, an analytical diagram becomes an ornament on a wallpaper.

Baudelaire’s first institutional solo exhibition in Germany presents three chapters of works dealing with the relationship between the Japanese New Wave cinema movement and the Japanese Red Army, between Tokyo and Beirut, revolutionary filmmaking and terrorist armed struggle. In collaboration with Masao Adachi, who was a key figure of Japanese avant-garde filmmaking and an ideologue in the Japanese Red Army, Baudelaire realised two films exploring the interconnections of militant politics and aesthetics: The Anabasis of May and Fusako Shigenobu, Masao Adachi and 27 Years Without Images (2011) and The Ugly One (2013).

With FRMAWREOK FAMREWROK FRMAEOWRK FOMARERWK, Baudelaire has produced a new chapter to these recent works and their installation, a layer that brings into the literal foreground the origins of his interest in these issues. Having trained as a political scientist, Baudelaire reveals, on over 200 meters of wallpaper, his vast collection of figures and tables that social scientists fabricate to grasp the elusive phenomenon of terrorism—juxtaposing these images to those produced with other tools but similar aims in his current practice as an artist.