For the different exhibitions seven artists showcase the galleries diversity in solo shows with images ranging from individual ways of using light to humor of an adult nature. 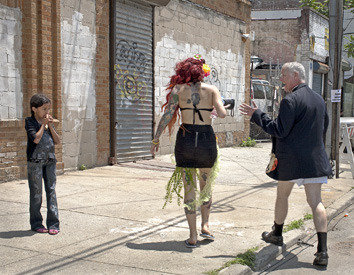 Lee Backer
The Edge of Night

“After sunset, I seek out interesting effects created by the lights and the darkening sky. Many of the places I photograph appear unremarkable in the daylight, but they attract my attention as the light shifts and the streets become deserted. The long exposures convey a sense of time and motion. There is a sense of stillness and quietness in these images which I find evocative and beautiful.”

Martin Frank
Going to the Sun

Going to the Sun is the name of the road through Glacier National Park that traverses the Continental Divide. Perhaps it also describes my four-day trip there. It began with almost three days of fog, drizzle and pouring rain but ended with a spectacular single day of Montana sun plus sky

“The idea for this project came to me in Bali when we drove up to a restaurant surrounded by tiny blue lights. In a kind of epiphany, I realized how much I was drawn to the color BLUE. These randomly-sighted objects defined, enhanced, illuminated or dominated by the color BLUE form a harmonious patchwork, with something of that slight edge the “blue note” adds to music.”

“I have been photographing Coney Island for nearly ten years now and, in going through my work recently, I culled photos in which, consciously or subconsciously, I captured juxtapositions of an adult nature. I call them JuXXtapositions. Humor is an important part of my life and I tend to view the world with a wink and a smile.”

Rumi Ral
As I Remember

The photographs in this exhibition are a collection of black and white images using traditional film and the wet chemical process to create psychological impressions of the human spirit.

“Cemeteries have forever intrigued me. They are quiet, mysterious places revealed in light and shadow. The ancient Necropolis evolved as a city of the dead, apart from homes and cultural institutions of the living. Historically, religious custom, and social status have been expressed in the size, style and decoration of each memorial. The form and context of each image, attempts to provide the viewer with an opportunity to experience these places in different ways.”

“The twelve portraits exhibited were chosen at random from a collection of fifty. The photographs were all taken using the same technique, Vivitar flash units. This school of lighting had a following in the 70′s and I was intrigued by it. Fifty portraits and $100 worth of equipment later, I realized that, technique aside, I was allowed a brief but intimate glimpse into the souls of my dear subjects. It was an experience of love, anger and fear.”