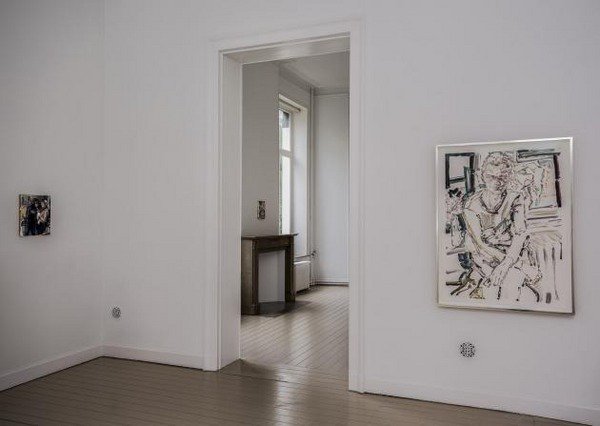 “Rocked by the wind and the waves; night falls; the waves slap the bow of our dinghy, and it pitches; the moon rises. In the position in which I am sitting, it was shining on my right leg and the portion of my white sock that was between my trouser and my shoe.” Gustave Flaubert, Flaubert in Egypt

Elizabeth Peyton was born in Connecticut in 1965 and currently lives and works in New York. In 1993, she had her first solo show in New York in room 828 in the Hotel Chelsea and has since been the subject of exhibitions at leading institutions throughout the United States and Europe. Her mid-career survey, “Live Forever,” was presented at the New Museum in New York in 2008 and traveled to the Walker Arts Center in Minneapolis, The Whitechapel Art Gallery in London, and the Bonnefantenmuseum in Maastricht. She has also been included in numerous group exhibitions including “Campo” at the 1995 Venice Biennale, “Greater New York” at PS1 in 2000, “Cher Pientre, Lieber Maler, Dear Painter” at the Centre Pompidou in 2002, the 2004 Whitney Biennial, “The Painting of Modern Life” at the Hayward Gallery in London in 2007, “Van Gogh Live!” at the Fondation Vincent Van Gogh in 2013, “NYC 1993: Experimental Jet Set, Trash and No Star” at the New Museum in 2013, and “Paint New York: Paintings from the American East Coast” at the Kunstforeningen GL Strand (2014). Her work is included in leading public collections, including the Guggenheim Museum, New York; Museum of Modern Art, New York; Centre Georges Pompidou, Paris; San Francisco Museum of Modern Art, San Francisco; Kunstmuseum Wolfsburg; Walker Art Center, Minneapolis; Museum of Contemporary Art, Los Angeles; Tate Modern, London; and the Whitney Museum of American Art, New York.