The exhibition presents a rigorous and coherent body of work, nourished by literature. In reference to John Milton's poem, Paradise Lost is the result of five years of work. 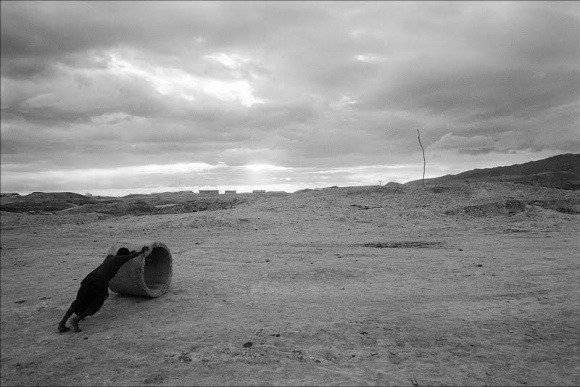 Klavdij Sluban is not a reporter who covers stories he’s a walker, who, as he says “prefers to discover rather than to cover.” For him photography is a pretext to travelling, the camera being just a tool to encounter the world. The subtle balance is reached when the reality of the world and the photographer’s inner perception meet. But to Sluban, the reality of the world is synonymous with chaos.

Travelling is not leisure time. When he hits the road, a long journey awaits him. Getting closer to the reality of chaos, to himself, coming back again and again and again, sharpening his eye so as to pare away layers of clichés and stereotypes, such is Sluban’s philosophy. “Exoticism” is the enemy to fight. Sitting on a knife’s edge, he photographs moments that could appear as empty and weak. This assumed attitude definitely makes him a contemporary artist: he no longer tries to depict reality in order to illustrate an event. “I do not photocopy reality. The event is dead” states Sluban in regard to the new era of photography we have entered; everyone who owns a camera could claim to be a photographer. “Photography starts where the unnamable appears” constitutes Sluban’s antidote to the anecdote. Sluban’s images are distressing. They could appear as dark and gloomy. But never say to Sluban that his photographs are sad for he will answer you quietly, yet firmly: “My photos are neither sad nor dark. There is always a highlight in each one of my photos, which should be seen as a bright point to be attained out of our darkness. What I actually consider as sad is when I see an anorexic top model on the glossy paper of some fashion magazine, with a bird’s feather stuck in her ass to promote a creamy deodorant lotion.”

As Jean-Christian Fleury writes in the introductory text to one of Sluban’s first major bodies of work, on the Balkans, “the black which gnaws at his images isn’t chic minimalism; it is a disarming abyss into which one may fall”.

Sluban develops throughout his “cycles”as he calls them, a rigorous and coherent body of work, nourished by literature. In reference to John Milton’s poem, Paradise Lost is the result of five years of work.

It first started with a series of travels to Cuba, Puerto Rico, the Dominican Republic and Haiti in 1999 and 2000. Sluban traveled with the renowned French writer François Maspero, for the newspaper Le Monde. These seem like remote and forgotten times when a publication would give total freedom to writers and artist-photographers allowing them to bring back what they had felt from their journeys, rather than what they should have seen.

Even so, Sluban felt the need to dig deeper and regularly returned to the West Indies for several years, particularly mesmerized by Haiti. By way of exhibitions, encounters, workshops and local projects, he continued to discover the islands in his own manner, never inspired by immediate and sensational current affairs.

Have the islands of the Carribean ever been a paradise? In any case, not for the people who live there. Sluban’s images translate (as oppose to illustrate) a vision of his own enhancing the contradictions, the weariness and the frail life in these scarred places.
Aware of all of this, the surprisingly striking feeling that Sluban’s perception of the Carribean islands leaves in the spectator’s eyes and soul, is one of courage, pride and graciousness of the people he met there.
Paradise Regained through Sluban’s inner vision?