Video, sculpture, photography by Araya Rasdjarmrearnsook: the artist presents over 20 artworks. 'In Practice: Under Foundations' is a group show for emerging artists. 'Belleza y Felicidad' is a retrospective of poetry booklets by Buenos Aires literature and art collective. 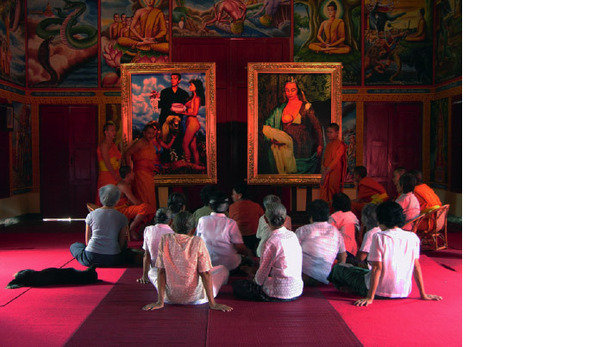 Araya Rasdjarmrearnsook is one of the most prominent artists working in Southeast Asia. The exhibition will showcase over 20 artworks spanning two decades of the artist's career, and will include video, sculpture, photography, and some of her better-known works, as well as those that have rarely been viewed, especially in the United States. Rasdjarmrearnsook is also producing new sculptures for the exhibition.

Working with psychologically rich materials, Rasdjarmrearnsook considers a wide range of subjects that have existed in marginal spaces' including women, the deceased, the insane, and animals. She creates complex narratives that confront societal structures of power and pedagogy. Concerned with systems of language and communication, Rasdjarmrearnsook makes earnest attempts to converse with subjects who don't speak in languages that are comprehended by or even acknowledged by mainstream society. For the past 25 years, her videos and installations have been regularly shown throughout the world.

Rasdjarmrearnsook represented Thailand at the Venice Biennale in 2005, and has been featured in many international exhibitions including Documenta 13, the Sydney Biennale, the Gwangju Biennale, the Istanbul Biennial, the Johannesburg Biennial and the Carnegie International. Rasdjarmrearnsook is also a respected professor in Thailand's leading art program in Chiang Mai University, where she has recently spearheaded one of the first media and theory departments in the country.

The exhibition is curated by Ruba Katrib, Curator, SculptureCenter.

In Practice: Under Foundations
Curated by Jess Wilcox
January 25 - April 13, 2015

Annual open-call exhibition for emerging artists with a focus on the production of new work. Curated by SculptureCenter 2014-15 Curatorial Fellow Jess Wilcox.

Situated in the building's lower level, the works in Under Foundations share an interest in what lies beneath the surface—the repressed, the discarded, the roots, or the source. Many of these works speak to unconscious desires, while others seek to trace, discover, and examine the past. The exhibition evokes a storage space of forsaken objects, full of stories and revelations. Together, these works incorporate a variety of disciplines—psychoanalysis, behavioral science, economics, and affect theory—and the impulse, act, and process of making are integral parts of a search for the elusive origins of the creative endeavor. They look to psychological states, everyday movements and behaviors, art historical touchstones, and deep-seated desires as points of departure

SculptureCenter is pleased to announce Now Showing: Belleza y Felicidad, a mini-retrospective of poetry booklets by Buenos Aires literature and art collective Belleza y Felicidad. Now Showing is a program that highlights a single artwork or project in areas throughout SculptureCenter's building and is an exploratory and flexible mode for presenting artworks and projects to our audiences.

Spearheaded by two friends, the poet and artist Fernanda Laguna and poet and translator Cecilia Pavón from 1999–2007 in a storefront gallery and art supply store, Belleza y Felicidad brought together writers and artists of differing generations and statures to collaborate on small books, events, and other happenings, energizing the Buenos Aires art and literature scene. Although no longer tied to a physical location, Belleza y Felicidad continues to produce books under their imprint. Published texts include poems by Laguna, Pavón, César Aira, Gabriela Bejerman, Roberto Jacoby, Fabián Casas, and many others. Select copies will be available for sale.

Additionally, the independent
Key West-based publisher Sand Paper Press is releasing a publication in February 2015, spanning the last fifteen years of Laguna and Pavón's literary works and collaborations. Belleza y Felicidad: Selected Writings of Fernanda Laguna and Cecilia Pavón includes an introduction by translator Stuart Krimko, noted for his work on Héctor Viel Temperley and other Argentine writers. This authoritative volume transmits the urgency and passionate feeling at the heart of one of the most exciting artistic and literary movements to emerge from South America in recent decades. This book will also be available for purchase in SculptureCenter's bookstore.

SculptureCenter
44-19 Purves Street
LongIslandCity
Thursday - Monday, 11am - 6pm
Closed Tuesdays and Wednesdays
There is a $5 suggested donation for entry, $3 for students