The Krazyhouse - (Megan, Simon, Nicky, Philip, Dee), Liverpool, UK. In the video installation, 5 teenagers dance by themselves for the camera against a white backdrop and to the sound of the music of their generation. 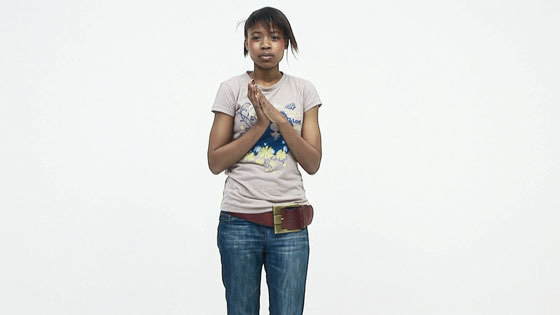 The Krazyhouse is a multi-channel video installation consisting of four screens on which five teenagers dance for the camera against a white background to the music of their choice. Rineke Dijkstra (b. 1959, Sittard, Netherlands) met the young people at an iconic Liverp ool club called The Krazyhouse and recorded them in an improvised studio on the premises. The three-quarter-length shots of these teens are interspersed with close-ups of their faces that show us their expressions in striking detail. The five performers differ not only in their choice of music— pop, heavy metal, or techno— but also in their personal appearance and the way they move before the camera.

In this piece, the Dutch artist attempts to direct the teens’ actions by confining them to a small space in which they cannot move around. Dijkstra places them before the camera against a white background and under a bright light; yet, at the same time, she gives them the freedom to express themselves and move to the beat of music with which they connect at a ce rtain point, making the youths reveal their personality, their subjectivity, to the observer.

Since the 1990s, Rineke Dijkstra has produced a complex body of work in photography and video. Her creations analyze, among other issues, the relationship betwe en viewer and image. A prominent aspect of her work, organized into series that let her explore each theme over an extended period of time, is her investigation of portraiture, often featuring adolescent subjects. In 1996 she produced her first video insta llation, drawn into the world of the moving image by a photography project that introduced her to nightclub subculture — a setting which resurfaced years later in the work now being shown at the Museum.

In both her photographic work and later experiments wi th video, one can identify common strategies and transfers of form and methodology that bridge the gap between the two media. However, in Dijkstra's video output, the syntax of the photographic medium is interrupted by the use of architectural space, time, and sound, as this immersive installation clearly illustrates.

Since its debut at the Tate Liverpool in 2010, The Krazyhouse has earned critical acclaim and toured extensively, visiting Paris, New York, Frankfurt, San Francisco, and Washington, D.C.