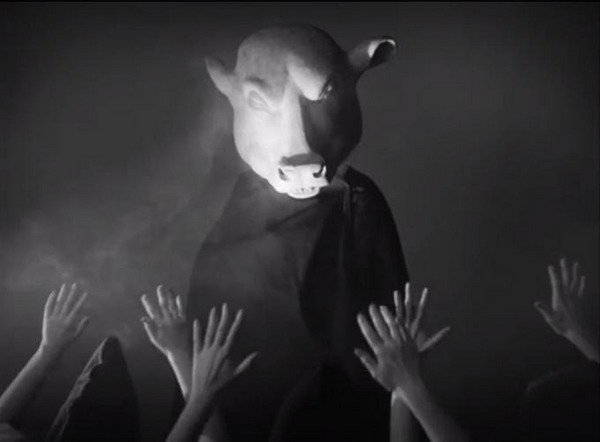 UNE DANSE DES BOUFFONS (or A JESTER'S DANCE), the new film by Canadian artist Marcel Dzama (born 1974, lives and works in New York), will be shown at KW Projects from February 22, 2015. Created in 2013 for the Toronto International Film Festival as a tribute to David Cronenberg, the nearly 35-minute film is on view for the first time in Germany.

In the film, Dzama reimagines the tragic love story between Marcel Duchamp and Maria Martins (played by Kim Gordon and Hannelore Knuts) as a psychodrama, which renegotiates presupposed polarities of good and evil, love and antipathy, dance and battle, lust and violence. Accompanied by a morbid soundtrack by Will Butler, Jeremy Gara and Tim Kingsbury (members of the band Arcade Fire), the atmospheric images and surreal characters of this silent film carry the viewers off into a fictitious fairy-tale world, full of art historical references. In fact, many scenes are based on well-known images of real violence, leaving us in the dark about how we should perceive and process such distorted pictures of torture, terrorism, corruption, and power.

Kindly supported by the Embassy of Canada.