The exhibition outlines a wide range of questions that are picked up by a younger artists and that are dedicated to the mutual contemplation of past and present. In his solo show Ressler proposes two video-based works, which are complemented by photographs and graphics. 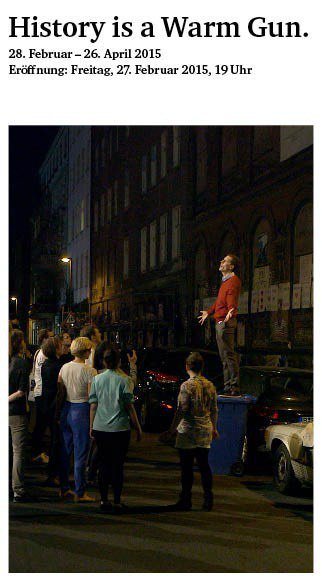 With the exhibition History is a Warm Gun, Neuer Berliner Kunstverein in 2015 resumes the series of exhibitions by fellows of the Fine Arts Scholarship of the Berlin Senate. History is a Warm Gun is an exhibition, expressing the experience of reality by artists, whose center of life and work is in Berlin. The exhibition maps out various perspectives on history by today’s generation of artists.
In a playful manner, the title refers to the Beatles song Happiness is a Warm Gun and emphasizes the empowerment of the participating artists to develop, also contrary to established historiography, own historical narratives.

History is a Warm Gun captures a current trend in art production and accompanies the selection of the artists in a seismographic way. The exhibition outlines a wide range of questions that are picked up by a younger generation of artists and that are dedicated to the mutual contemplation of past and present with recourse to historical and personal events. How do artists, who live in Berlin, deal with their country of birth or the country in which they live, and how does an interest in one’s own biography express itself? Hitherto neglected historical events are interrelated with current and personal events and are repeatedly put in the focus of production.
The artists took advantage of the scholarship in order to reflect their artistic practice and working methods, to conduct extensive research and to explore the influences of previous generations on their own artist generation. With references to history, ethnology or biology they discuss in videos, photographs, paintings, sculptures, installations, and performances diverse social, cultural and political issues.

Publication
The exhibition is accompanied by a publication as part of the n.b.k. book series “Berlin”, published by Verlag der Buchhandlung Walther König, Cologne, with a foreword by Tim Renner and Marius Babias, as well as texts by Jan Brandt, Britta Schmitz and Silke Wittig.

Oliver Ressler Leave It in the Ground

Oliver Ressler in his films and videos deals with democracy, economy, ecology as well as forms of resistance and protest against political elites and the development of alternative models. At Neuer Berliner Kunstverein, Ressler shows two video-based works, which are complemented by photographs and graphics. Against the backdrop of the idyllic landscape of the Lofoten, Leave It in the Ground (2013, 18 min) describes the climate change not as a technical or scientific, but as a political problem that in the future will provoke fundamental social and political transformations. The Visible and the Invisible (2014, 20 min) addresses the impact of the exploitation of natural resources by international commodity traders, whose headquarters are in Switzerland.