Billy Apple was in London when British art went 'Pop' in the '60s, in New York in the '70s when artists rejected the museum, and since the '80s has been right here, testing how far art can infiltrate life 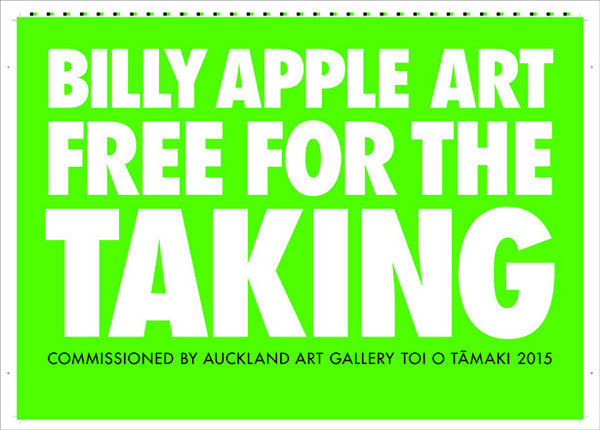 Billy Apple (born 1935) is a conceptual artist who has consistently explored the "economic aspect" of art since he launched himself as a newly minted art object-cum-"brand" in his first solo exhibition at Gallery One in London in 1963.

Born Barrie Bates in Auckland New Zealand, and trained at the Royal College of Art in London (1959–62), his contribution to the nascent Pop art scene and to the pre-history of Conceptual art was to re-invent himself as "Billy Apple," a new product to be "sold" using the tools and techniques of advertising and retail display.

Since that inaugural exhibition, Billy Apple has examined the consequences of this cardinal gesture, negotiating a relationship to the market and the museum, in London, New York—where he lived between 1964 and 1990—and Auckland, New Zealand.

A retrospective tracking Billy Apple's practice from 1960 to the present opens 14 March and runs until 21 June at Auckland Art Gallery Toi o Tāmaki. The most substantial review of his work to date, the exhibition brings together 180 works across all media. It maps the artist's evolution, from his earliest images and objects that revised the genres of self portraiture and still life by means of found imagery and mechanical reproduction, to his latest collaborations with intellectual property lawyers to become a registered trademark and with scientists to create a cell line that can live outside his body and is available for medical and artistic research.

The show also presents neon and light pieces Apple made between 1965 and 1969 that have not been seen since the 1970s, and documents the activities and interventions Apple executed in gallery and non-art spaces, from APPLE, his own not-for-profit space at 161 West 23rd Street, New York (which operated between 1969 and 1973), and other spaces in Manhattan, to museums and dealer galleries throughout New Zealand. For the first time in New Zealand, the exhibition will lay out the relationship between these temporary and site-specific works and the text-based canvases in his Art Transactions, From the Collection, Golden Rectangle and Gallery Abstracts series.

According to the exhibition's curator, Christina Barton, "Apple is an artist of and for our times. He tests how art and the artist can perform within the terms of consumer capitalism in an era of ever-advancing technologies. A show of this magnitude is timely. It will enable audiences to fully comprehend Apple's contributions to contemporary art history."

"An active player in key art movements from the 1960s to the present, Apple has contributed significantly to the histories of Pop art, Light art, Conceptual art, Performance art, Installation art and more," says Auckland Art Gallery Director Rhana Devenport. "Billy Apple® The Artist Has to Live Like Everybody Else is the first exhibition to bring all the dimensions of Apple's long and diverse practice together. This is a major initiative for Auckland Art Gallery and New Zealand."

The exhibition is accompanied by the publication Billy Apple® A Life in Parts (Auckland Art Gallery Toi o Tāmaki, 2015, ISBN 978-0-86463-300-2), an illustrated chronology by Christina Barton.

Billy Apple was the subject of a major two-part survey at Rotterdam's Witte de With Center for Contemporary Art in 2009. He has also had two solo shows at The Mayor Gallery in London in 2010 and 2013. His work is included in International Pop, the Walker Art Center's major survey of Pop art opening in Minneapolis, USA in April 2015. His works are to be found in major collections including Tate Britain, the Solomon R Guggenheim Museum, National Galleries of Scotland, Auckland Art Gallery Toi o Tāmaki and Te Papa Tongarewa Museum of New Zealand. Billy Apple is represented by Starkwhite, Auckland; Hamish McKay Gallery, Wellington; and The Mayor Gallery, London.