Metamorphosis, as the name suggests, explores the transformation in the artist's work over the years. Among the transformations examined are Lombardini's relation to his subject matter, his portrayal of Nature, metaphysical and real and his relationship to the materials that he uses. 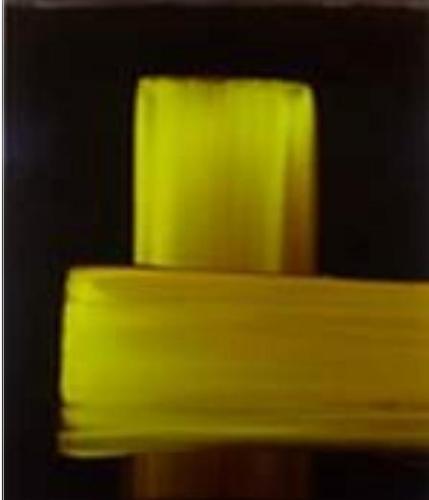 Barbara Behan is pleased to present Metamorphosis, Giovanni Lombardini's first solo exhibition in London. Giovanni Lombardini (Rimini, 1950) has been active on the Italian art scene for over three decades, starting out at the Accademia di Belle Arti, Urbino in 1969 where he studied under the vastly influential Concetto Pozzati and Pierpaolo Calzolari and where he has remained as a teacher ever since. Throughout his career, his art has evolved with an abiding concern for a world constantly in flux and for the transient nature of ideas. These two themes have been a constant even as his style shifted from the 'arte povera' style he employed in the 70s to the strictly abstract language he has used in the 1990s to the present day.

Metamorphosis, as the name suggests, explores the transformation in the artist's work over the years. Among the transformations examined are Lombardini's relation to his subject matter, his portrayal of Nature, metaphysical and real and his relationship to the materials that he uses.

The exhibition opens with Lombardini's photographs of the early 1970's. One of the artist's key influences was undoubtedly Marcel Duchamp, which can be seen most starkly in Shoes with grass and Line dividing sea and shore. Both works explore the line that exists between the ephemeral and the eternal. Shoes with grass, which has been re-created as an installation for this exhibition alongside the original photograph*, is a still life depicting the contradiction between an old pair of shoes decaying over time and the grass growing and thriving from seed inside them. Similarly, in Line dividing sea and shore, the letters in the title are carved out of soap and arranged on the strand to be swept away by the waves that lap the shore.

Lombardini has consistently paid homage to nature and, even when his work is reduced to a simple line drawn on the canvas (Ghost, 2000; Cut and Dry, 1993), we are still able to detect the profile of a mountain here, a sugar cane there. It is a long way from the conceptual works of his youth where nature the protagonist. There is still the same spontaneity, though, as Lombardini lets the colour take its natural place on the canvas just by gently tilting the surface. Colour is evident in all his work as it drops, glides and shimmers across the surface to produce distinctly poetic and beautiful works.

If Nature is a fundamental theme throughout Lombardini's art the means with which he achieves it in his recent works are absolutely un-natural. Since the late eighties the artist has been applying bronze and copper varnishes to X-Ray transparencies (X-Drops, 1987; Double Zero, 1991) and using sheets of Formica as a support for his industrial paints and enamels (Solubile, 2003; Semi-precious gems, 2003). Consistent with his 'arte povera' roots and a disregard for pure aesthetics, Lombardini is more interested in experimenting with off beat objects and materials and letting them to their own devices as much as possible.

* Shoes with grass became the public manifesto for the Accademia di Belle Arti, Urbino and later, in 2000, won the International Museum Concorso in Luxembourg.

Next exhibition: Hans-Hermann, Freedom Zone, 2 June to 25 July 2004
Gallery open Wednesday to Saturday 11am to 6pm or by appointment.