The Light in Cuban Eyes

This will be the first New York exhibition focused on work made during and after Cuba's 'Special Period', the time of extreme hardship and poverty which followed the withdrawal of Soviet resources in the early 1990s. 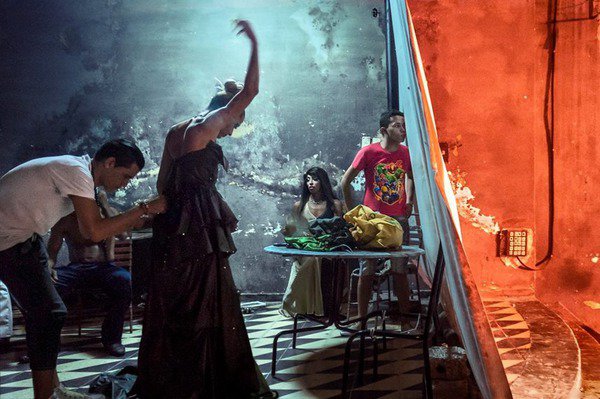 In Cuba, cultural richness clashes with economic destitution, pride chafes against frustration, and beauty mingles with decay. From classic street scenes to metaphorical abstractions, traditional silver prints to the newest inkjet technologies, each artist grapples in his own way with the countryʼs coinciding and contradicting inherencies. Some, like Álvarez Pupo and José Julián Martí, capture unfamiliar moments of daily life in moody black-and-white: a farmer provokes a rooster for a cockfight, and suited men conceal binoculars like guns behind their backs. Quesada and García invoke more poetry in presenting Cubaʼs scenery, with monumental waves crashing against a stony shore and white linens fluttering like peace flags above the city.

Others find indirect methods of artistic commentary. Acostaʼs bright, colorful portraits of old automobiles subtly and wryly reference the Cuban governmentʼs prohibition of new cars and the peopleʼs ingenuity in personalizing their ancient vehicles. With Manet-like black backdrops and sharp front-lighting, Fernández comments on Cuban stereotypes by presenting exotic dancers as plasticine figurines. And some, like Liudmila & Nelson and Batista, direct their statements towards Cubaʼs most enduring symbol—the body, joining and struggling against the narrow sea. From this small island nation, these artists present divergent bodies of work that pay tribute to the rich cultural history of their homeland while looking toward the future.

The exhibition is inspired by long-time patron of Cuban photography Madeleine P. Plonsker, who has been traveling to Havana since 2002 to discover and support the work of emerging Cuban photographers. Coinciding with the exhibition will be the release of the book The Light in Cuban Eyes, published by Lake Forest College Press and organized by Plonsker. The Light in Cuban Eyes is the first North American publication with support from the Cuban Ministry of Culture and Fototeca de Cuba, Cubaʼs repository of photography comparable in function to the Smithsonian Photography Department in Washington, D.C.