The exhibit, which offers a rich and diverse perspective on the act of art, features the works of 9 artists who have received the Foundation's Visual Arts Grants. This 21st edition explores the notion of the art piece as an 'interface' or a medium that enables the user to visualise a process. 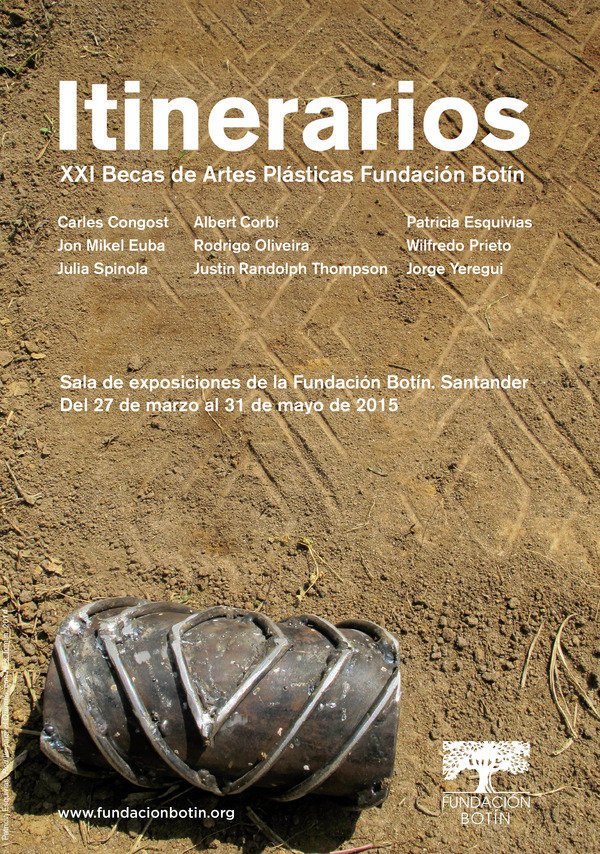 Between 28 March and 31 May 2015, the Fundación Botín exhibition hall in Santander will be hosting the 21st edition of the Itinerarios exhibit, an annual showcase that displays the works of the Foundation's Visual Arts Grant holders, and which year after year provides insight vis-à-vis the current state of the arts.

A group exhibition that sums up the work produced by these artists throughout the period covered by the grant, between 2013 and 2014, and which above all aspires to promote ambitious research projects, while serving as a snapshot of the prevalent trends of a given moment. Hence the experimental aspect and the sense of formal freedom that we see in many of the projects on display.

This edition of Itinerarios explores the notion of the art piece as an 'interface' or a medium that enables the user to visualise a process. This concept imbues the formal research of these artists and shapes their interest in producing 'open-ended' works of art that can gradually evolve over time. Yet it also enables them to embark on a line of conceptual research that began decades ago; one which tends to cast doubt on the idea of the work of art as a product, underscoring the fact that the finished form somehow hides the intellectual and physical process of its production.

Our living environments increasingly respond to our presence and require an ever more active input from us, thanks to our daily use of countless devices that lead us to a constant interaction. Twenty years ago, the term 'relational aesthetics' was coined to describe an artistic practice that considered the viewers' participation as a key element in the creation of meaning. Elaborated so as to engage the visitor, the work was conceived as an environment, an installation; artists today take this approach a bit further, pondering the effects of interactivity as being a key part of contemporary culture.

Yet these more fluid forms can also reflect the compression of time, a commodity that becomes ever more valuable with our intensified exposure to the constant flow of information, which in turn requires greater processing abilities in order to assimilate the complexity of our environment.
This phenomenon has affected the creative process just as it has affected other human activities. Until recently, computers processing large and complex sets of data (for example, calculations or video files) required huge amounts of time to complete their task. As machines become more powerful, this period of latency has gradually disappeared. One might say that it is now the human mind that must adjust to these new conditions, with the tremendous challenge that this entails.

And though the art exhibition may be one of the very few remaining redoubts for reflection and contemplation, artists continue to address the new state of culture. For instance, their work may take the guise of sets of documents —text, images or relics— offered for consultation. The visitors then become researchers of sorts, drawing their own conclusions through their own processing of the elements on display. This 'documentary/installation' format reflects the musings of and the imprints left behind by an ongoing thinking process that seems difficult to express in any fixed manner: it is a form that suggests a state of constant change, much like that of the world we live in.

According to Benjamin Weil, the curator of the exhibit and the Art Director of the Botín Centre, the formal concept of 'assemblage' could define much of the work displayed in this most recent edition of Itinerarios, 'where the artists freely combine elements of diverse media —painting, sculpture, photography, video and performance— to create hybrid or multi-layered narrative structures'.

It is precisely that combination of elements that forms the open-ended structure that the visitor is then encouraged to activate by mentally associating its components, often relating them to the space they occupy. Hence, the architecture of the exhibition space in part becomes a built-in part of the artistic proposal and the formal condition of the work may also evolve over the course of time, for example, when it is 'activated' by the performance.
The similarities in the concerns expressed by the participating artists in this 21st edition of Itinerarios are offset by their different approaches and tactics. Together, they offer a rich and diverse perspective on the contemporary art practice of a new generation.