The artists involved in this exhibition scrutinize questions of responsibility in each of the societies, but their contributions also revolve around the way in which we can relate to the atrocities through the procession of the visual and audio files collected from International Criminal Tribunal for the former Yugoslavia and other archives. 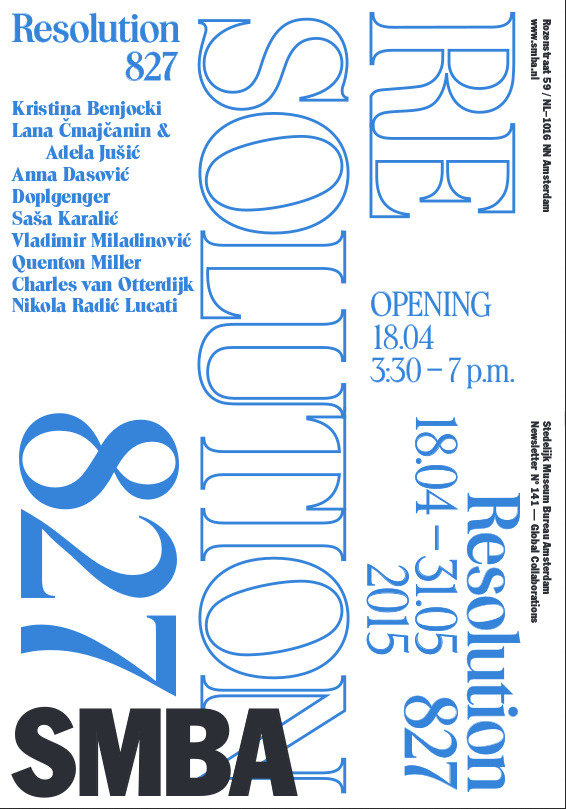 “Resolution 827" is the outcome of collaboration between Stedelijk Museum Bureau Amsterdam and the Museum of Contemporary Art, Belgrade, in the context of Global Collaborations. The title of the exhibition, “Resolution 827”, refers to the UN resolution that was adopted in 1993 establishing the International Criminal Tribunal for the former Yugoslavia (ICTY).The point of departure for the exhibition was to find a common denominator in the analysis of the societies of Serbia as well as other republics of the former Yugoslavia and the Netherlands, and to open up the debate on shared sore points, like the genocide in Srebrenica, that was subject to ICTY investigation.

The artists involved in this exhibition scrutinize questions of responsibility in each of the societies in question, but their contributions also revolve around the way in which we can relate to the atrocities through the procession of the visual and audio files collected from ICTY and other archives. These artistic proposals point to a lack of public debate on questions of the utmost importance to our societies, such as the resolution of policies of aggression and ethnic cleansing in case of former Yugoslavia, and policies of deterrence by presence in case of the Netherlands. By exposing how these topics that appear to be locally grounded in each of the societies in question resonate in one another, we can reflect upon the universalizing potential of social and political taboos.

Furthermore, the question arises what the economic and political dynamics of the societies in ex-Yugoslavia are, now they are engaged in the process of “normalization” while lacking the capacity or will to resolve the sore points of their recent history. And does the Netherlands also has a role in this process? This exhibition aims to reflect on these questions through research-oriented projects that analyze causes and consequences without assuming a patronizing, didactic or accusatory position. Quite the contrary, these projects open up a niche for public debate on issues that remain to be unresolved, even after more than twenty years.

Stedelijk Museum and Museum of Contemporary Art in Belgrade collaborated before in 2004, after the end of the Miloševic era in 2000, when a new policy of internationalization of its programmes became priority for MoCA, Belgrade. In 2004, when the Stedelijk itself had embarked on the long-term renovation of its building, the MoCA, Belgrade hosted an exhibition of highlights from the Stedelijk’s contemporary art collection. Shortly afterwards, the MoCA closed for renovations too, and although the work was repeatedly postponed, MoCA is now scheduled to reopen in October this year. The Salon, the project space of MoCA, in Belgrade, kept on functioning, (not unlike SMBA’s relationship to the Stedelijk Museum) and it was the Salon that recently hosted the SMBA exhibition “Zachary Formwalt – Three Exchanges”.
The current group exhibition “Resolution 827” can be considered the second step in institutional collaboration. This time we envisioned collaboration that will reflect the societal issues that were relevant not solely for Belgrade, but that also have a common denominator in ex-Yugoslavia and Netherlands with global and universalizing importance.
________

The exhibition is accompanied by a Global Collaborations edition of the SMBA Newsletter, with an introduction by the curatorial team, Zoran Eric (MoCA, Belgrade), Jelle Bouwhuis and Joram Kraaijeveld (SMBA); an essay by Zoran Eric, and separate texts on the participating artists.

A panel discussion related to the exhibition ‘Resolution 827’ in SMBA will be held in Stedelijk Museum on Thursday 23 April. This panel discussion brings together artists, theorists and curators to reflect upon artistic ways to deal with traumatic histories and their correlating visual imagery. What could be the role of art, and position from which an artist can speak about the (im)possibilities of finding resolution for a traumatic conflict such as the one in which Yugoslavia dissolved. Participants include: Damir Arsenijevic (De Montfort University, Leicester), Zoran Eric (MoCA, Belgrade), Jason File (artist and war crimes prosecutor), and Milica Tomic (artist, founding member of Grupa Spomenik / Monument Group and initiator of the project and Working Group Four Faces of Omarska), The discussion will be moderated by Arno van Roosmalen (Stroom Den Haag, See You in The Hague).
________

Global Collaborations is a three-year project that aims to generate an informed and well-balanced overview of developments in contemporary art from a global perspective. It is based on collaborative partnerships with experimental and multifaceted art institutions throughout the world and encompasses exhibitions, publications, events, and an online platform. The program takes place at the Stedelijk Museum and at Stedelijk Museum Bureau Amsterdam (SMBA), the project space of the Stedelijk. Global Collaborations continues until the end of 2015 and was initiated by Jelle Bouwhuis, head of SMBA, and project curator Kerstin Winking.
________

Global Collaborations is generously supported by the Mondriaan Foundation and Foundation Ammodo.