Song Tao and JI Weiyu set up Birdhead in 2004. They started their art creation through a large quantity of photography works, showing various social contradictions and controversies that have been ignored and evaded by people. 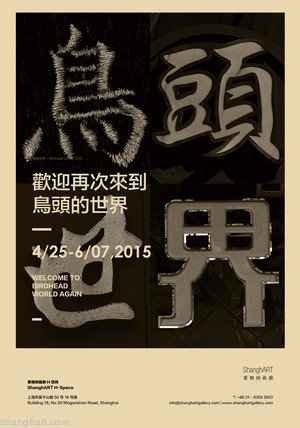 SONG Tao and JI Weiyu set up Birdhead in 2004. They started their art creation through a large quantity of photography works, showing various social contradictions and controversies that have been ignored and evaded by people. Shanghai as their birthplace has been rising rapidly, but still houses its fragility and inferiority which is intended to be unveiled by Birdhead. And their works, like a blast of fresh air, has been brought to gradually break the fancy-looking shell of the city. While the word‘Shanghai’ in their works has been transforming bit by bit, Birdhead’s works have become more mature as they have devoted themselves to art creation more than ten years. This solo exhibition is meant to review the past work, but to make a claim as well. Let us enter the world of Birdhead and search for the most common but ignored real word.

Birdhead is keen on traditional Chinese culture, but did not show their interests in classics until the Tang Poem Song Jambic Verse in 2011. Just like they said, they have been enlightened and creating by instinct. And the implied connection between the past and the present in their works seems to be inspired and generated by their gene and blood in their body. This feature is going to be illustrated in the exhibition. In terms of curating and displaying, the gallery decides to create a yard-like space with‘three jins’ (‘jin’ in Chinese means ‘enter, progress and forward’). ‘The first jin’is designed to present 370 photographs that were shot in recent years. The Chinese character ‘妙’ on the wall, which constitutes two Chinese characters –‘女’ （female） and ‘少’ (little or few; young), is the highlight in that space. ‘The second jin’exhibits the latest work For a Bigger Photo that is framed by traditional lacquer. The collection in this space is the extract of the theme. Visiting the world of Birdhead is a process of transformation from being open to being private. When you expect to see something more exciting in ‘the third jin’, the artists suddenly define all the chaotic images and ingeniously configuration as ‘the world of Birdhead’ which seems like a puzzle but tells everything.

Their first photography catalogue is Bird Head published in 2004, which has only two copies and one of them is missing. But their works can still be easily found in many art fairs and well-known art organisations like Tate Modern, The Museum of Modern Art (New York) and Ullens Foundation etc.