14 Billions (Working Title) is one of several works the artist has made using the spiderweb as a starting point. His fascination with the spiderweb and how astrophysicists use it to explain the origin and structure of the universe was the impetus for the installation. 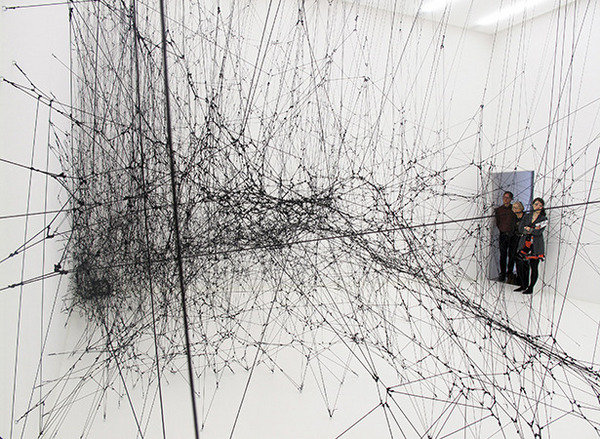 Tomás Saraceno is both an architect and an artist. He is noted for making utopian installations that combine science, art and architecture. Saraceno is interested in how scientific inventions can lead to a more sustainable society, and he allows art to have a central role in visualizing and testing out different visions of the future.

14 Billions (Working Title) (2010) is an enormous model of the web of a black widow – a poisonous spider. The public are invited to walk around and through this installation, which consists of 8,000 black elastic bands stretching from floor to ceiling and held together with 23,000 individual knots.

Saraceno was initially curious about how scientists use the spider web as a metaphor to describe the universe’s origin and structure. To make the work, he collaborated for two years with arachnologists, strophysicists, architects and engineers. The project’s research material is also on show.

This installation is one of several of Saraceno’s works dealing with spider webs and their relation to architecture and cosmology – the web’s social and symbolic value is also elucidated.

Tomás Saraceno was born in Argentina in 1973 and lives and works in Frankfurt, Germany. Sørlandets Kunstmuseum is grateful to Bonniers Konsthall for loaning the work and for assistance in planning the exhibition project.