The artist in her works she balances strong form with a playful openness, text fragments with found objects and a political content with a poetic language. 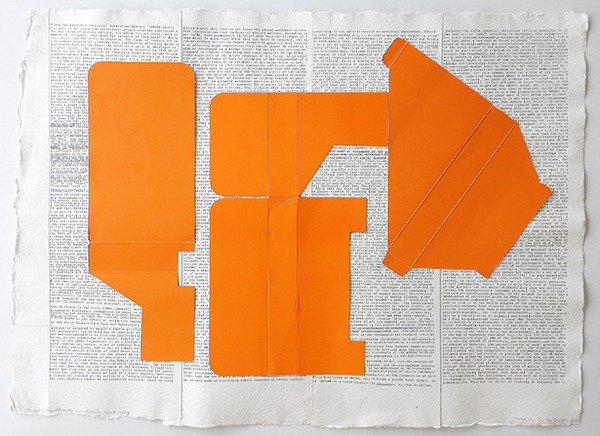 Wenche Gulbransen (Norway) has been active as an artist since the mid-70s. She works in a variety of formats and materials: drawing, collage, artist books and sculpture. In her works she balances strong form with a playful openness, text fragments with found objects and a political content with a poetic language. In her exhibition for Kunsthall Trondheim she will combine new works with older pieces into a new site-specific installation.

The notions of modernity and modernism are at the core of Wenche Gulbransen´s interest and practice. Her work Say it! Modernity, modernity, modernity. (pattern), 2015, can be seen as a dialogue with a text fragment by American art historian Matthew Biro where he talks of modernity as a liberation process, in which old structures are replaced by new, at the same time as it represents a continuity, a matrix.
In the work the text fragment is repeated, written by hand or typewriter, and fills the surface of the rough paper with a visual – and mental – pattern. On this pattern the artist has placed the pieces of an unfolded cardboard box – strong orange forms that float on top of the text surface. Patterns on patterns, pure form and the individual expressed in the handwritten text, theoretical content in words and strong materiality in the industrially produced cardboard – different aspects of modernism´s language collide, conflict and contradict each other. There is an ongoing discussion in Gulbransen´s oeuvre that points more to the process then to the finished art works.

She works in long processes, sometimes for several years. The strong forms she often builds on are kept in movement, the interspaces offering the necessary emptiness, which allows openness and change, the possibility of different kinds of choices and a result that always points outside of itself. There is no real contradiction here to the fact that the “result” is perceived as a given, as something that could be in no other way, hidden in the material an unveiled, emerging as a miracle – or at least as a fact. It´s a physical and intuitive process, juggling around the pieces until finally, or not, the work is there; it steps out and is present. I work with my head close to the ground – she says in a comment.