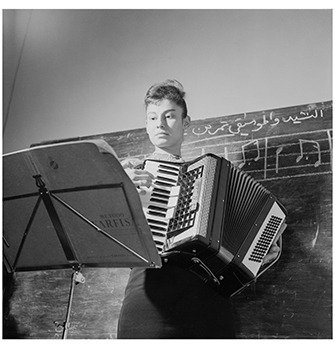 The Ruya Foundation for Contemporary Culture in Iraq (Ruya) is pleased to announce its plans for the National Pavilion of Iraq at the 56th Venice Biennale in May. The exhibition, Invisible Beauty, will be curated by Philippe Van Cauteren, Artistic Director of S.M.A.K. (Museum for Contemporary Art). It will feature five contemporary Iraqi artists and include new works that have been produced specifically for the exhibition as well as works that have been rediscovered after long periods of inattention. The exhibition will be accompanied by a display of over 500 drawings made by refugees in northern Iraq. World-renowned artist Ai Weiwei has selected a number of these drawings for a major publication that will launch at the Biennale, TRACES OF SURVIVAL: Drawings by Refugees in Iraq selected by Ai Weiwei.

“Invisible Beauty” refers both to the unusual or unexpected subjects in the works that will be on display and to the inevitable invisibility of Iraqi artists on the international stage. The endlessly interpretable title is intended to reveal different ways of approaching art generated by a country that has been subjected to war, genocide and, in the last year, the rise of Isis. The systematic demolition of the cultural heritage of Iraq by Isis has made it more important than ever to focus on artists continuing to work in Iraq. The Pavilion will provide a platform to make these artists visible.

The artists in the exhibition will comprise two generations of Iraqi photographers, in the shape of Latif Al Ani and Akam Shex Hadi, visual artist Rabab Ghazoul, ceramicist Salam Atta Sabri and painter Haider Jabbar. Both Al Ani and Atta Sabri are based in Baghdad, whilst Shex Hadi is based in Iraqi Kurdistan and Jabbar and Ghazoul work outside of Iraq, in Turkey and Wales respectively. A great number of Iraqi artists continue to practise an orthodox aesthetic tradition and the Pavilion artists represent a break from these constraints.

Latif Al Ani (b. 1932) is considered the founding father of Iraqi photography and his documentary career spans from the late 1950s to the late 1970s, when it became impossible to photograph in public due to the increasingly authoritarian atmosphere of the Saddam regime. By contrast, Akam Shex Hadi (b. 1985) represents a later generation of Iraqi photography and he produces staged, symbolic works. His work, along with that of Haider Jabbar, is concerned with the rise of Isis. He has created a new work for the Pavilion that includes a recurrent motif that resembles both a snake and the Isis flag.

Painter Haider Jabbar (b. 1986) will show a series of watercolour portraits reflecting on the fates of young men who have died in the Isis conflict. Jabbar is himself a refugee, now living and working in Turkey with the support of the Ruya Foundation. Rabab Ghazoul (b. 1970) also responds to her particular geographical relationship to Iraq. She is producing a new work for the Pavilion that will focus on the Chilcot Enquiry.

Salam Atta Sabri (b. 1953) has worked extensively in arts administration in Iraq and abroad but despite training as a ceramicist and drawing extensively, he has never shown his drawings in public. 100 recent works will appear at the Pavilion for the first time.