Black 'n White. The artist will present two oppositional grids formed by the repeating covers of two iconic albums by the Beatles and AC/DC. 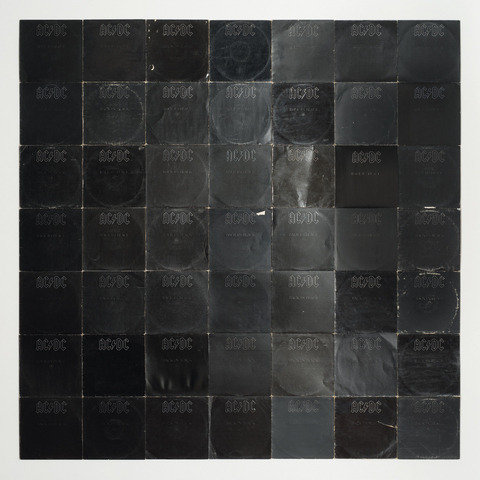 “... the grid announces, among other things, modern art’s will to silence, its hostility to literature, to nar- rative, to discourse. As such, the grid has done its job with striking efficiency.” Rosalind Krauss, “Grids”, October, Vol. 9 (Summer, 1979).

The pleasures of popular music have little in common with modernist art’s well-documented drive for purity. In her PS Projectspace exhibition BLACK ’n’ WHITE, Sydney-based artist Nell presents opposi- tional grids formed by the repeating covers of two iconic albums by the Beatles and AC/DC. By calling these black and white monochrome grids More Sound Hours Than Can Ever Be Repaid she allows for experience and narrative: the ungentle material lives these artefacts have traversed bear witness to the pleasures they have repaid their owners’ investments of time. For a wide demographic, simply to look at these album covers is to hear music, spontaneously and unbidden. It’s a cliché but pop music – and even AC/DC is popular music – is the soundtrack to our lives. It is music which drowns out modernism’s will to silence; feeding back into the grid it’s noise to modernist art’s pure signal.

Commonly called the White Album, it’s actually no such thing. The Fab Four’s ninth studio album is, in fact, eponymous. It’s art world equivalent would be a minimalist painting conspicuously named Untitled. Created by esteemed British pop artist Richard Hamilton, the cover for The Beatles (1968) featured unique serial numbers, an astute comment on the aura of the (musical) work of art in the age of me- chanical reproduction. “En masse they look devastatingly ‘painterly’ and they reference so many of the tropes in modernist painting: the grid, the monochrome, the readymade, editions, appropriation, etcet- era,” Nell has said.

But these “monochromes” are dirty. Even AC/DC’s Back in Black (1981) doesn’t stay that way. Greasy or smudgy fingerprints, vinyl ring wear, spilt drinks: life gets in. It’s like bacteria that boost our health. Nell’s own biographical narrative surfaces in the fact that one of the white Beatles records was her fa- ther’s copy, which she “thrashed”, as the vernacular has it, as a teenager. Many will recognise the grids’ shared title as a tribute to the late US artist Mike Kelley. Again it’s autobiographical: Kelley was a huge inspiration to Nell as a young artist, among so many others of her generation, and she was working on these grids when news came of his suicide. “I was very affected by his death and so that’s why the title is so direct,” she says. Kelley, of course, was exemplary in making art that showed how life leaves its grubby marks on us.

The Beatles was recorded as the group was falling apart; Back in Black was made as AC/DC was trying to hold it together following the death of singer Bon Scott. Nell is attracted to diametrical oppositions (life/ death, noise/silence) but, in keeping with her Buddhist practice, always seeks a middle path, a third way. The third work in this exhibition, A Short History of Rock ‘n’ Roll – My Grey Album, takes a copy each of Back in Black and The Beatles and, in two gestural storms of enamel paint, covers them in their opposite tones. Obviously, the artist could have uniformly reversed the colours, using stricter post-painterly fields of black and white. But she is happy to leave the mess because she knows that, outside the grid, rock ’n’ roll really is noise pollution. And who would have it any other way?