Ambivalence. The artist, who has named his works after brands of medicine used to treat schizophrenia, uses a monochrome colour palette to highlight the contrast created by the mass eclipse of reason in the socio- political axis. 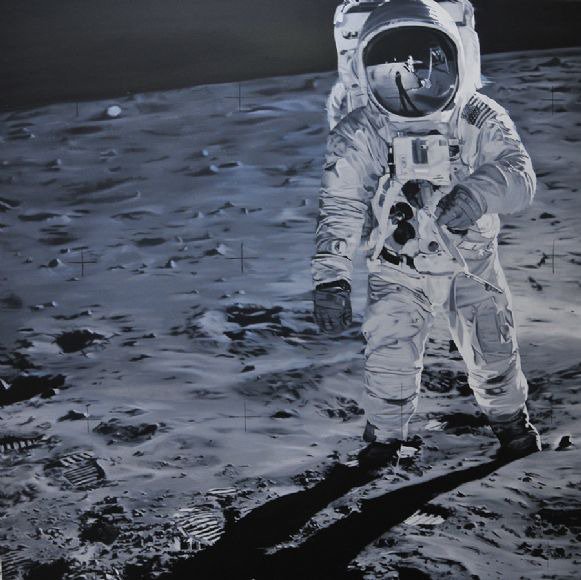 In Ambivalence, Alpin Arda Bağcık examines the notion of reality that photography presents through his works of charcoal and oil on canvas. Taking its name from a psychological term used to describe coexistence of opposite feelings towards a person or a situation, the exhibition takes its strength from the momentary reality a photograph captures and an ambiguous space between the various perceptions and interpretations that accumulate on that moment. Through his paintings, Bağcık takes another look at the “reality” of the photographs of historic people and events that were transmitted to the public by the media. He focusses on the power relations that affect the lives of the masses via his chosen people and events, and underlines the disinformation about news that were published or unpublished by the media.

The artist, who has named his works after brands of medicine used to treat schizophrenia, uses a monochrome colour palette to highlight the contrast created by the mass eclipse of reason in the socio- political axis. The visuals that Bağcık uses take on similar stories in different places. He lays bare the struggle of the individual to dominate others and nature through the disinformation and manipulation that occurs in places from Gezi Park to the Great Basin Desert, from the surface of the Moon to military units in China. The unease, felt when one cannot be sure of what one sees, makes itself evident through a sharp and painterly quality.

The artist especially pays attention to the probabilities the diffraction creates at the very moment we begin to doubt the veracity of a situation. This moment that contains all probabilities in its ambiguity, takes us away from the reality we constantly labour to reach whilst pulling us closer to a schizophrenic division of perception.

In Olanzepin, the 37 figures in the photograph taken in Tennessee in 1945, that immortalises the delight felt by those who had flashes exploding in front of them for the end of the war, meld with the charcoal registration, which has gotten distorted seven times in seven days, of a suspect who resists opening his eyes at the existing world. In Flupentixol and Zuklopentixol, as the first man on the Moon with his one-man source of life pushes the limits of the desire to discover new places; in the same twilight interspace, in a desert on Earth where life flows in its full opulence, tests of an atomic bomb designed to suffocate the masses open to question the reality of the very ground we walk on. Ambivalence, looks at the contradictions and charms of political history through the lenses of old cameras, and presents the masterful works of a young artist to its audience.