Do we dream under the same sky

A large-scale work at the crossroads between the fair and the complexity of the urban fabric. As an elementary fragment of the future studio residency at the land, the installation takes up the idea of an experimental workshop and puts it into practice in the public space of the Messeplatz in Basel. 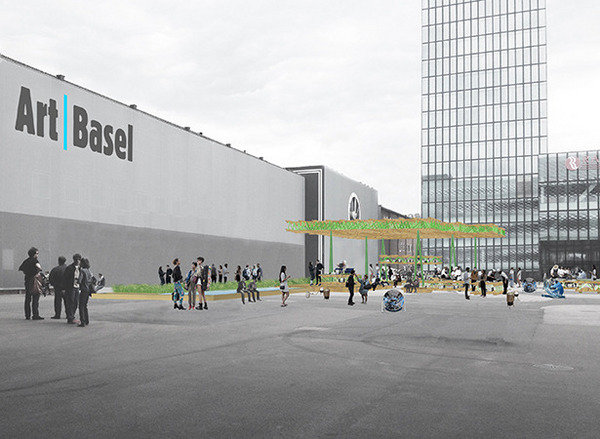 For the week of Art Basel 2015, DO WE DREAM UNDER THE SAME SKY by Rirkrit Tiravanija, architects Nikolaus Hirsch/Michel Müller, and chef Antto Melasniemi will be installed on the Messeplatz in Basel. This new work can be seen as a disembodied extension of "the land," a self-sustaining artistic community initiated by Rirkrit Tiravanija and Kamin Lertchaiprasert near Chiang Mai in Thailand that engages with the idea of an artistic utopia, presenting an ecological and sustainable model for future artistic practice.

DO WE DREAM UNDER THE SAME SKY can be experienced as a large-scale work at the crossroads between the fair and the complexity of the urban fabric. As an elementary fragment of the future studio residency at the land, the installation takes up the idea of an experimental workshop and puts it into practice in the public space of the Messeplatz in Basel. At the end of the show, the structure will be shipped to Thailand where it will form the basis for a new studio residency building that will host a range of artistic projects and workshops. Reminiscent of a Surrealist "exquisite corpse"—beginning with a single contribution that continues to grow piecemeal—various architects, engineers, and artists will contribute to this unusual assemblage as a collective work.

Under an open bamboo shelter, visitors are encouraged to engage in public debate and ad hoc discussions in the convivial atmosphere of shared food. Primarily sourced from local grocery stores and wholesalers, the ingredients are those that would have otherwise been thrown out (a project initiated by students from the FHNW Academy of Arts and Design in Basel in collaboration with students from the Städelschule in Frankfurt). Cooked with herbs and spices grown on site, the resulting dishes will be rooted in the Thai tradition but with a Finnish twist. However, unlike the traditional catering tents at the fair, there will be no fixed opening hours, menu, or price list. Even compensation is self-determined—by self-serving, serving others, donations, or participating in the cooking or washing up.

The installation consists of a modular bamboo and steel structure housing several kitchen and garden elements designed by Nikolaus Hirsch & Michel Müller within which the various themes of the project will be played out. Investigating models of sustainability, DO WE DREAM UNDER THE SAME SKY employs various alternative energy models and a solar kitchen created by Melasniemi himself. Reflecting on the implications of the geopolitics of food, Tiravanija and Melasniemi have created a hybrid menu of Thai-Finnish recipes including fish ice cream and what they call a "bastard" pad Thai.

The installation will function as a platform and ideological extension to "the land" in the form of a series of symposia with Raphael Fellmer, Karl Holmqvist, Harald Lemke, Chus Martínez, Hans Ulrich Obrist, Tobias Rehberger, Lorenzo Romito, Superflex, Jeronimo Voss, among others.

On the occasion of the installation at Art Basel, a book will be published by Sternberg Press (designed by Studio Matthias Görlich) and will include contributions by Nikolaus Hirsch, Karl Holmqvist, April Lamm, Antto Melasniemi, Philipp Misselwitz, Michel Müller, Jörn Schaffaff, and Rirkrit Tiravanija