Entering the (sub)Textiles. Works that foster aspects of an artistically investigative exploration of history, including the role of the textile industry within the capitalist form of commodity production and the means of organising production methods. 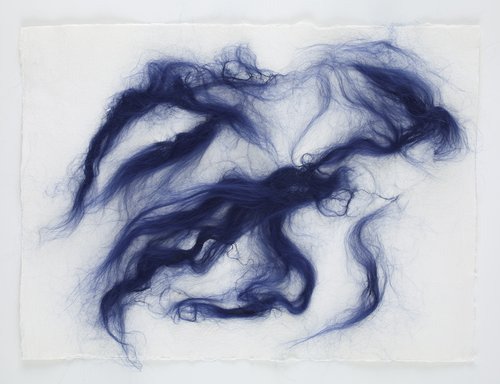 With "wow! Woven? Entering the (sub)Textiles," the Künstlerhaus, Halle für Kunst & Medien is presenting an exhibition that encompasses two of the venue’s levels. It is devoted to the diverse issues related to the position of “textiles” as medium and material in the exploration of contemporary art practices in this present age teeming with networking metaphors.

From the very beginning in nearly all cultures and with usage impacting society, textiles have been veritably predestined for being charged with political content, and for use and consideration even outside of artisan contexts and the related negotiability on an artistic level. In the recent past, numerous large and comprehensive exhibitions have carried out exacting surveys on the general familiarity of the textile, on its sensory qualities, its uniquely inscribed features, and its wealth of weaving types, textures, and works developed globally over the centuries. Such projects have contributed to a renaissance and re-evaluation of textiles and emphasised their natural tendency to challenge the classically hierarchical concepts of work, image, and object. "wow! Woven? Entering the (sub) Textiles" accentuates its exhibition focus by concentrating on works that foster aspects of an artistically investigative exploration of history, including the role of the textile industry within the capitalist form of commodity production and the means of organising production methods.

Exhibition participant Rubén Grilo, for example, emphasises with a series of denim fabric works the onset of industrialisation as a turning point in our relationship with technologies. Once synonymous with a durable fabric for the working class and later symbolic of the Western individualist promise of freedom, today the visible wear and tear of jeans is designed through digital processes and implemented using laser irradiation before even hitting the market. This act allows the factors previously specific to strong work-, body-, and time-related wear to degenerate through mere simulation and thus highlights the changing body-work relations. The artist Sascha Reichstein, in turn, presents a large installative video work “The Production of Tradition” focused on the outsourced production of traditional clothing by example of lederhosen in Sri Lanka. She for instance explores the dissolution of formerly prevalent workmanship forms aligned to local conditions and the concomitant loss of traditional artisan techniques, regional distinctions, and the ability to identifying goods with specific locales.

The far-reaching history of the precarious working conditions within the textile industry, still unchanged today, and of the revolutionary potential of the textile workers in countering such abuse are thematised by
Judith Raum. Presented in the exhibition, her research project “disestablish” takes the first weavers’ uprisings in fourteenth-century northern Italy as its point of departure and shows the textile to be a carrier material of social conflicts, with the artist using banners made of textile material to make this point.

The collaboration of Ines Doujak and John Barker in the form of the longstanding and still ongoing research project “LOOMSHUTTLES/WARPATHS” likewise examines the complex relations among fabric, clothing, and colonialism starting with the early forms of global capitalism. On the evening of the exhibition opening, shirts from the artists’ Haute Couture collection accompanying the project will be presented for sale as part of their exhibition presence. The shirts themselves represent a visualization of the the tight job-order calculations at the expense of safety precautions for the sewers employed at the textile mills.

Against this content-focused backdrop of the presented works, which particularly reflects on processes of production, "wow! Woven? Entering the (sub)Textiles" compiles a further variety of selected artworks that present a reflexive spectrum of textile use ranging between tangible material, meaning-laden medium, technique, and idea. The works of art thus embody the general fragility of the material, attempt mediatic translations, and confirm their enduring fascination, including extraordinary positions by Heidi Bucher, Sheila Hicks, Helena Huneke, and Ingrid Wiener.