The group show gathers together artists, scientists and organisms to explore multispecies collaboration that reshapes the ruins of modernity and resists industrialized progress. 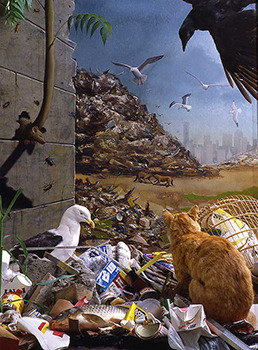 DUMP! gathers together artists, scientists and organisms to explore multispecies collaboration that reshapes the ruins of modernity and resists industrialized progress. Contesting the celebratory logics of invention and making that dominate contemporary discourse, DUMP! creates an arena for waste, obsolescence, and decomposition, where practices of nurturing and collective cultivation may begin, turning composts to compositions.

DUMP! upends the division between nature and culture, while refusing separations between art and science; the art institution and the natural history museum; and wonder and comprehension. By presenting creations of humans and nonhumans alike, DUMP! calls out for new ways of seeing, describing, making, and living in unruly entanglement within contaminated worlds.

Inspired by Lucy Lippard, a self-described “compiler” of exhibitions, and taking its cue from garbage heaps – and the multispecies life that ferments and flourishes in them – the exhibition will continue to grow throughout its duration.

The exhibition is sited in and between two locations: Kunsthal Aarhus and Søby Brunkulslejerne - a post-mining landscape of contamination, garbage, and unruly multispecies transformation. Both places will host projects, proposals, artifacts, and concepts compiled along two strands of overlapping inquiry that constitute the DNA and organizing principles of the show:

UNMAKING MAKING:
There is a utopian and almost naive celebration of the creative maker in this era of crisis and extinction - a heroic figure invoked as alibi for economic recovery and sustainability by policymakers and governments. DUMP! proposes that the seduction of making, which also often goes unexamined in the field of art, dangerously reinforces a techno-positivist neoliberal logic of accumulation, which has accelerated the ruinous buildup that is threatening the very possibilities of collective life.

MULTISPECIES COLLABORATION:
The ecological crisis facing the planet evokes an apocalypse that can be rationalized and mapped. DUMP! proposes that its key challenge is messy: nature and culture, humans and nonhumans can no longer be taken apart. Plants, fungi, animals, microbes challenge us to reconsider the unruly, rogue, invasive, and unspectacular compilers that hold things together, in effect playing across difference. DUMP! challenges the story of human domestication and mastery with murky, multispecies heaps.

FIELDWORK AND PUBLIC PROGRAMMES:
Art-science collaborations established with the support of the interdisciplinary group Aarhus University Research on the Anthropocene (AURA) will result in numerous newly commissioned projects and public events held on 5 - 6 September. Featuring participation and works by Åsa Sonjasdotter, SPURSE, Anna Tsing, Cecilia Vicuña, Paweł Wojtasik, among others, they will take place at DUMP’s two sites: Kunsthal Aarhus and Søby Brunkulslejerne.

COLLECTIVE MAKING series 2015 – 2016 is developed by Joasia Krysa, Artistic Director at Kunsthal Aarhus, and supported by the Danish Arts Foundation, Aarhus Kommune, the Obel Family Foundation and Goethe-Institut Dänemark. Additional support for DUMP! is provided by Aarhus University Research on the Anthropocene (AURA).

The exhibiton is selected from an international Open Call in connection with our exhibitions programme COLLECTIVE MAKING.

The selection panel maked the following statements:
DUMP: Making and Unmaking of Anthropocene [previous title] is an excellent addition to the current Kunthal Aarhus Collective Making programme. We believe that when approaching ideas around collectivity in contemporary times, it is particularly urgent to consider the role of non-human agents and to collapse the hierarchies between nature and culture. We look forward to seeing how the participating artists and contributors propose a new aesthetic language for post-anthropocentrism and multi species collaboration. The project also presents an exciting curatorial and research collaboration between Aarhus University and Purchase College State University of New York (SUNY) that will inform the related public programme.'