The representation of art from Africa in the twentieth century. The selection of more than 45 works from the collection of the Royal Museum for Central Africa is based entirely on early reproductions, descriptions and observations made by photographers, writers and ethnographers. 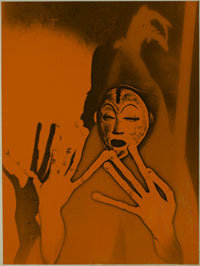 European Ghosts examines the Western perception of African art in the twentieth century. Which exotic and colonial ideas lie at the origin of ‘our’ perspective on primitive art, ‘art nègre’ and ethnic art? What role have European and African artists, writers and researchers played throughout the last century? Is there a shared heritage? How much has changed since Guillaume Apollinaire’s plea ‘Sur les musées’ (1908), in which he asked for space to be made in the Louvre for ‘exotic masterpieces’? Today, one hundred and seven years later: what image do we have of Africa nowadays, and what role does the ethnographic museum play within it? Which traces of colonial anthropology and ethnography are still at work today?

These questions lie at the heart of European Ghosts. Why has Mu.ZEE taken up the challenge of working with the collection belonging to the Royal Museum for Central Africa in Tervuren? An initial answer lies in the dialogue that the museum initiated with the artist Sammy Baloji in the summer of 2014, in the context of the exhibition Hunting and Collecting. He brought together artists and scientists, and combined historical documents and economic data with the art collection of Mu.ZEE. This suggested way of thinking, from the point of view of documents, is continued in European Ghosts.

Documents and texts are the starting point of the exhibition, particularly the first photographs and publications of objects and masks from Africa. The selection of more than 45 works from the collection of the Royal Museum for Central Africa is based entirely on early reproductions, descriptions and observations made by photographers, writers and ethnographers, as well as upon previous exhibitions about African art. European Ghosts also looks at the chronology of the 20th century and the overlaps between art and politics. The writings and observations made by influential thinkers and writers after 1945, such as Aimé Césaire, Cheikh Anta Diop and Frantz Fanon, are covered extensively. Lastly, European Ghosts examines various exhibition models, and methods of design and representation in exhibitions and publications: from the ‘universal exhibition’ in Brussels in 1897 to the present day. Patrick Wokmeni has photographed masks and objects from the Tervuren collection for European Ghosts.

The Ghosts in the title are our own, and perhaps the time has come to map the ‘forms and signifiers’ behind different perspectives and ways of looking? European Ghosts is about a century of looking and being looked at, the related interpretations and, where necessary, the confrontation of gazes. (*)

European Ghosts in collaboration with the Royal Museum for Central Africa in Tervuren.