Nature Morte. Ruff's recent negatives extend his explorations of the photogram, in which he used positive and negative imagery to create a mesmerizing photographic world of nebulous shadows, spheres, zigzags, and hard edges against richly colored backgrounds. 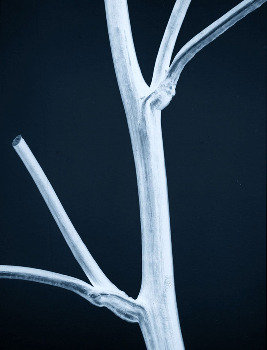 Ruff is a leading innovator in the generation of German artists that propelled photography into mainstream art. Open and explorative, he has pushed the limits of the medium, harnessing technologies both old and new—including night vision, hand-tinting, and stereoscopy—to reconceptualize architectural, astrological, pornographic, and portrait photography. In the objective tradition of his former professors Bernd and Hilla Becher, Ruff's deadpan Portraits are characterized by a startling level of legibility; while in the ma.r.s. series, he amplified black-and-white NASA reconnaissance images with 3-D rendering and saturated color. In recent works, he has engaged the photogram, the camera-less technique advanced by Man Ray, László Moholy-Nagy and others during the early twentieth century; and the visual and evocative properties of the photographic negative.

Ruff's recent negatives extend his explorations of the photogram, in which he used positive and negative imagery to create a mesmerizing photographic world of nebulous shadows, spheres, zigzags, and hard edges against richly colored backgrounds. Reversing the negative's role as a means to an end—the master image from which the print is created—he digitally transforms sepia-toned albumen prints into dramatically contrasting apparitions. The size of the prints—29 x 22 centimeters—roughly corresponds to the scale of the glass plates that could be exposed with a large camera during the nineteenth century. In the negatives shown at Gagosian Beverly Hills in 2014, Ruff portrayed posed nude subjects with white marble skin tones; in new works he imbues plants with sculptural dimensionality, heightening the form and character of each specimen. Reduced to a white silhouette, a vase of lilies resembles rising smoke; the bright puff of a drooping hydrangea is a focal point among hazy grey tones. Revisiting historical techniques to invent meta-photographic genres, Ruff continues to expand the subjects, possibilities, and appearance of images.

The exhibition is accompanied by a fully illustrated publication with an essay by Philip Gefter.