17 Wall Drawings - 1970-2015. The exhibition revolves around one of LeWitt's basic theoretical principles which has since then become widespread in the practice of contemporary visual art, namely, the supremacy of the idea and of the creative process over the work of art proper. 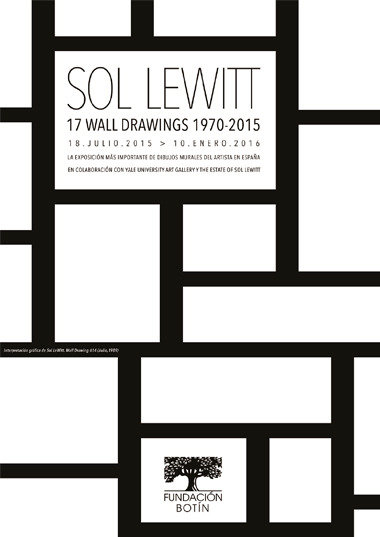 From the 18th of July to the 10th of January 2016, the exhibition space of the Botín Foundation in Santander will host the exhibition Sol LeWitt. 17 Wall Drawings. 1970-2015.
Organized in collaboration with the Yale University Art Gallery and the Estate of Sol LeWitt, it is Spain's most ambitious exhibition to date devoted entirely to Wall Drawings by one of the leading lights of 20th century art who is regarded as the father of Conceptual Art.

The exhibition -curated by John Hogan, Director of Installations and archivist of Wall Drawings at the Yale University Art Gallery who, since 1982, worked as a drawer for Sol LeWitt; and by Benjamin Weil, Artistic Director of the Botín Centre- will offer visitors a unique view of the stylistic and conceptual development of wall drawing in the artis´s oeuvre.

Sixteen of the Wall Drawings from the selection on display in the exhibition, executed between 1970 and 2015, have never been shown before in Spain -only the seventeenth drawing was previously shown in Spain in 1989- and most of them have never been shown again since they were first made more than twenty years ago. In addition, Wall Drawing 7A will be executed for the first time in the Botín Foundation's exhibition space.

Sol LeWitt. 17 Wall Drawings. 1970-2015 revolves around one of LeWitt´s basic theoretical principles which has since then become widespread in the practice of contemporary visual art, namely, the supremacy of the idea and of the creative process over the work of art proper. As the artist himself pointed out: "the idea is the machine that makes the work of art".

Additionally, the collection of Wall Drawings on show in Santander reflects the extraordinary consistency of LeWitt´s systematic explorations and the notable diversity and evolution of his artistic praxis, both from a stylistic point of view (from his simple geometric figures to "continuous" and "complex" forms) and in terms of the variety of media used (graphite, colour pencils, India ink and acrylic paint).

The show will be accompanied by an exhibition catalogue collecting some of Sol LeWitt’s writings, alongside several texts by experts and personal recollections by contributing artists. The exhibition’s curator Benjamin Weil has made the selection, which explores the artist’s development and oeuvre.