Between Mountains & Lakes. The artist is widely recognized as one of the world's greatest and most influential living landscape photographers. He generates the intensity of his works by a slow and accurate approach to his subjects. 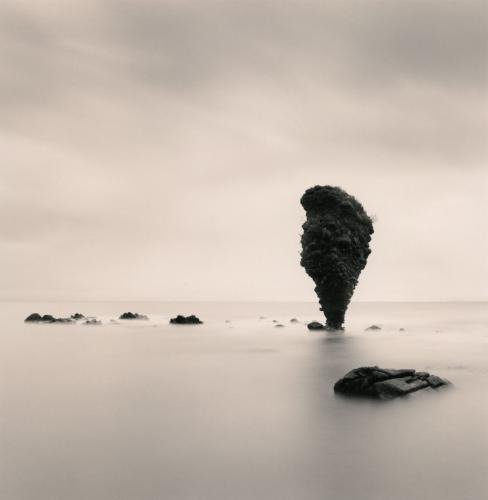 The second half of 2015 at Bernheimer Fine Art is dedicated to renown British photographer Michael Kenna. The first exhibition Between Mountains & Lakes explores Michael Kenna’s lake and mountain views.

Michael Kenna is widely recognized as one of the world’s greatest and most influential living landscape photographers. He generates the intensity of his works by a slow and accurate approach to his subjects, which is created by an extreme long exposure time with a Hasselblad. Instead of editing the images digitally he works in the darkroom with the negatives that he understands as an essential part of his work. The formats he choses are also rather unusual: his prints are rarely bigger than 20 x 20 cm.

Kenna is not interested in snapshots or the documentation of everyday life, he offers a meditative and sublime view on the world that consists of harmony and balance. In our fast-moving time he dedicates himself with a lot of patience and devotion to the act of photography in which the result is initially on the second place:

„Getting photographs is not the most important thing. For me, it’s the act of photographing. It’s enlightening, therapeutic and satisfying, because the very process forces me to connect with the world. When you make four-hour exposures in the middle oft he night, you inevitably slow down and begin to observe and appreciate more what’s going on around you. In our fast-paced, modern world, it’s a luxury to be able to watch stars move across the sky.“

For many years Michael Kenna has been traveling around the world and keeps on revisiting the same places. He understands these places as “friends” and is fostering these relationships to his old “friends” instead of making new, superficial ones. Just as he is revisiting places he repeats certain elements in the images. A moving star sky, wavering clouds or diffuse sky, lonely trees, mystical patches of fogs, peers at lakes or seas belong to these elements. His images are based on the landscapes; however, they are captured in geometrical compositions of lines and surfaces, whereby their natural character is transformed into a less relatively non-natural environment. Thus he creates a contrast between movements and stillness, far and near, construction and chaos, moment and cumulative time. In the tradition of romanticism he seems to follow his idol Caspar David Friedrich representing human states of mind such as solitude and melancholia and proposing questions about transience and infinity.

In his photographs one can feel the magical aura that captivates by its powerful silence the viewer.

When Kenna was a child he wants to become a priest, now, he conveys serenity and contemplation by his images that challenge the dimensions of time and space.

Born in Widnes, England in 1953, he studied at St. Joseph’s College, Up Holland with a view to become a Catholic priest. At 18, he changed direction and studied at the Banburry School of Art, Oxfordshire before concentrating on photography at the London College of Printing, where he graduated with honours in 1976. In the same year he came in touch with the works by Bill Brandt that had a big impact on his style. In 1977 he moved to San Francisco, where he worked for 10 years as photographic printer for the renowned photographer Ruth Bernhard. Kenna adopted many of Bernhard’s ways of creative working and has developed his own distinctive and often emulated style of photography and printing.

Kenna’s personal, hand-made, non-digital, photographic prints have been shown in over 600 gallery and museum exhibitions throughout the world. Over 50 monographs and exhibition catalogues have been published on Kenna’s works. His limited edition fine art prints are in the permanent collections of numerous institutions, such as the Bibliotheque Nationale, Paris, The National Gallery of Art, Washington DC, the Tokyo Metropolitan Museum of Photography, and the Victoria and Albert Museum in London.