The artist conceives art as an interplay of colour, language and form. His fascination for language and meaning is expressed in his drawings, books and performances. 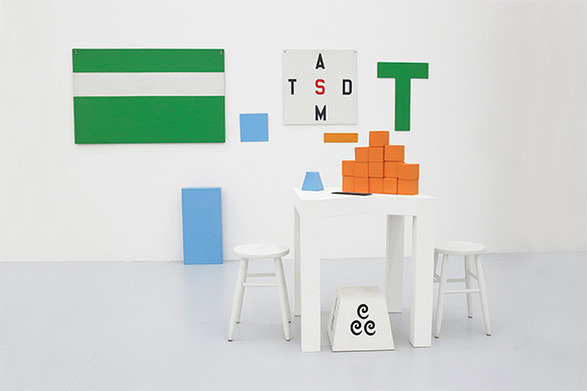 Guy de Cointet (1934–83) conceives art as an interplay of colour, language and form. His fascination for language and meaning is expressed in his drawings, books and performances. Fragments of text, colourful objects and actors blend the everyday with the absurd. His artworks come to life in performances.

The artist moved from Paris to New York in 1965, where he came into contact with Pop Art. In Los Angeles, he went on to develop his own enigmatic visual language. De Cointet’s work is a source of inspiration to artists today working in the field between performance and visual art.

Guy de Cointet was fascinated by how language is used in different forms, from advertisements and conversations to literature, soaps and radio. In his drawings, texts and performances, he introduced new ways of engaging with words, form and meaning. De Cointet broke language down and transformed letters into visual, rhythmic signs with clean lines and primary colours. Viewers decipher his texts not to discover the meaning of his art, but simply to enter into a dialogue with it.

De Cointet’s performances grew from his desire to explain his texts using objects and speech acts. He drew inspiration for his absurd dialogues from popular culture, literary sources and everyday conversations. Enlightenment goes hand in hand here with confusion.

M is presenting the first solo exhibition of his visual work in Belgium. The show includes a wide range of works: from the first encrypted drawings and books, to the later monologues, set designs and theatrical productions inspired by the current events of his time, mass media, and popular culture.