The Political Nightfall. By investing architecture with a metaphorical power that lies between reality and fiction, between the image itself and what it recounts, Moreau makes us spectators of the present, subjected to the mechanisms of power and left to grapple with the catastrophic scenarios. 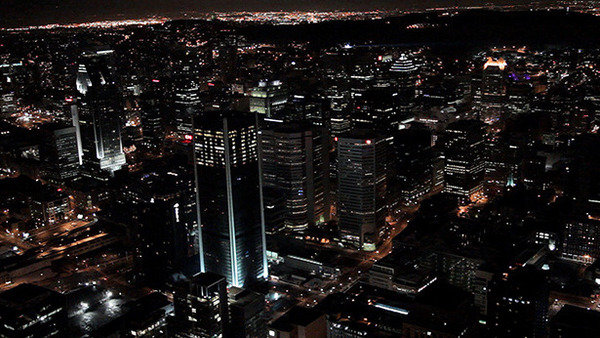 The photographic, film and sound works of Aude Moreau cast a hitherto unexampled light on the North American city, with its modernist grid, its towers soaring to breathtaking heights, its illuminated logos speaking the language of the multinationals, its solids that box us in, and its voids that provide an exit. Because the artist embeds film in architecture, writing in glass, politics in economics, transparency in opacity, and indeed the private in the public, she deflects and refashions the iconography of these often stereotypical urban images, whose future shows no way around the gathering political darkness.

By investing architecture with a metaphorical power that lies between reality and fiction, between the image itself and what it recounts, Moreau makes us spectators of the present, subjected to the mechanisms of power and left to grapple with the catastrophic scenarios that flow by in an endless loop.

The exhibition is a production of the Galerie de l’UQAM in Montreal in partnership with the Canadian Cultural Centre, Paris, Casino Luxembourg, Luxembourg, and The Power Plant, Toronto.

Aude Moreau
Aude Moreau has developed a practice that encompasses her dual training in scenography and the visual arts. Whether with concepts painstakingly developed over several years to produce ambitious instal­lations, films and photographs, or with material interventions in an exhibition context, like her famous sugar carpets, Aude Moreau focuses a relevant, critical gaze upon showbiz society, the privatization of the public space, and the domination of the State by economic powers in today’s world. Her work has been shown in Quebec, France, the United States and Lux­embourg. Aude Moreau has a Master’s in Visual Arts and Media from the Université du Québec à Montréal. She is a recipient of the Claudine and Stephen Bronfman Fellowship in Contemporary Art (2011), as well as the Powerhouse Prize from La Centrale (2011).

Louise Déry
With a PhD in art history, Louise Déry has been the Director of the Gal­erie de l’UQAM since 1997. She has been a curator at the Musée national des beaux-arts du Québec and the Montreal Museum of Fine Arts, and has worked with a number of artists, including Rober Racine, Dominique Blain, Nancy Spero, Michael Snow, Daniel Buren, Giuseppe Penone, Raphaëlle de Groot, Shary Boyle and Sarkis. Curator of some 30 exhibitions abroad, including a dozen in Italy and others in France, Belgium, Spain, Turkey, the United States and Asia.

She was the curator of the Canada pavilion at the Venice Biennial with an exhibition by David Altmejd (2007). She returned there to present performances by Raphaëlle de Groot in 2013 and by Jean-Pierre Aubé in 2015.