The Fact of Matter. the internationally celebrated choreographer and dancer presents a selection of his performative objects, video installations, performances and interactive environments. 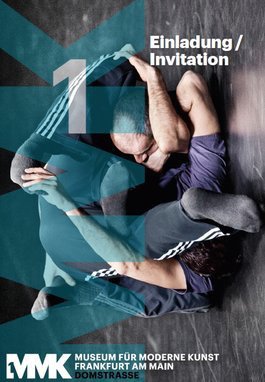 In the autumn, the internationally celebrated choreographer and dancer William Forsythe will present a selection of his performative objects, video installations, dance performances and interactive environments at the MMK Museum für Moderne Kunst.

William Forsythe (b. 1949) is considered an innovator of the language of ballet who has redefined the practice of dance and thus exerts unparalleled influence on later generations of dancers. His resignation as artistic director of the Forsythe Company in the spring of 2015 marked the start of a new chapter in the development of his choreographic œuvre. At this turning point in his artistic career, the MMK Museum für Moderne Kunst Frankfurt am Main is dedicating a comprehensive monographic show to the internationally celebrated choreographer, dancer and artist William Forsythe.

Over the past decades Forsythe has created an unequalled dance cosmos. He has developed ground-breaking ballet choreographies, experimental dance theatre pieces, digital dance scores and site-specific installations that unexpectedly turn the visitors themselves into players. Among these works is the research project Motion Bank (Improvisation Technologies) carried out from 2010 to 2013, a digital platform in the area of dance analysis, notation and improvisation.

The city of Frankfurt am Main has maintained close ties to William Forsythe for thirty years. It was here that he founded the Ballett Frankfurt in 1984 and The Forsythe Company in 2004. Forsythe has been honoured with numerous internationally recognized dance prizes, and in 2010 was awarded the Golden Lion for Lifetime Achievement at the Venice Biennale.

Spread out on all floors of the MMK, the show will take a programmatic look at the boundaries between the visual arts and choreography and give the museum visitors an opportunity to experience Forsythe’s Choreographic Objects on their own bodies. Forsythe’s performative Choreographic Objects will enter into union with the museum architecture by Hans Hollein. With his artworks, Forsythe will moreover conduct dialogues with opera magna from the MMK collection such as Fred Sandback’s Gray Corner Piece (1968), Nam June Paik’s One Candle (1988), Richard Serra’s Hand Catching Lead (1968), James Turrell’s Twilight Arch (1991), On Kawara’s Date Paintings (1966‒2000), Cy Twombly’s Problem I, II, III (1966), John Chamberlain’s Wildroot (1959), Bruce Nauman’s Perfect Balance (1989), Florian Hecker’s Event, Stream, Object (2010), Teresa Margolles’s Aire (2003) or Walter De Maria’s High Energy Bar (1966). Line, movement, sound, compositional structures and performative aspects in space play an immanent role in all of these works.

The works by William Forsythe to be highlighted in the show will include large, site-specific installations such as The Fact of Matter (2009), Additive Inverse (2007), Nowhere and Everywhere at the Same Time (2005) or the interactive video piece City of Abstracts (2000), but also video installations such as Stellenstellen Film (produced in cooperation with the MMK in 2013), Lectures from Improvisation Technologies (1994) and the meanwhile legendary Solo (1997). Forsythe will develop several works especially for the Frankfurt show.

Following solo presentations at the Lipsiusbau, Dresden, 2014; the Folkwang Museum, Essen, 2013; the Wexner Center for the Arts, Columbus, 2009; the Tate Modern, London, 2009 and the Pinakothek der Moderne, Munich, 2006, this will be the first museum exhibition to present Forsythe’s œuvre in all its facets with principal works of the past twenty years.