The exhibition showcases over 20 bodies of work across various mediums. It is focuses on two of the artist's long-term projects: The Atlas Group (1989-2004) and Scratching on things I could disavow (2007-ongoing), Raad's work investigates distinctions between fact and fiction, and the ways in which we represent, remember, and make sense of history. 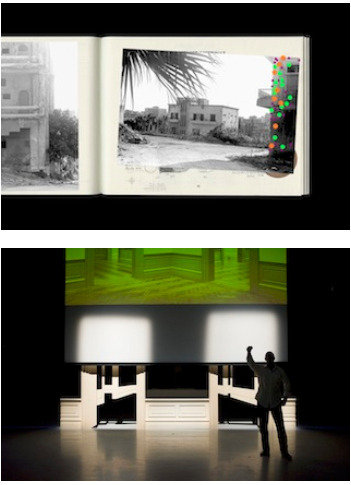 MoMA presents the first comprehensive American survey of the artist Walid Raad (b. 1967, Lebanon), whose work in the last 25 years investigates distinctions between fact and fiction, and the ways in which we represent, remember, and make sense of history. The exhibition brings together over 20 bodies of work across various mediums—including photography, video, sculpture, and performance—identifying Raad as a pivotal figure in contemporary art. Dedicated to exploring the veracity of archives and photographic documents in the public realm, the role of memory and narrative within discourses of conflict, and the construction of histories of art in the Arab world, Raad’s work is informed by his upbringing in Lebanon during the civil war (1975–90), and by the socioeconomic and military policies that have shaped the Middle East in the past few decades.

The exhibition focuses on two of the artist’s long-term projects: The Atlas Group (1989–2004) and Scratching on things I could disavow (2007–ongoing). Under the rubric of The Atlas Group, a 15-year project exploring the contemporary history of Lebanon, Raad produced fictionalized photographs, videotapes, notebooks, and lectures that related to real events and authentic research in audio, film, and photographic archives in Lebanon and elsewhere. Raad’s recent work has expanded to address the Middle East region at large. His current ongoing project, Scratching on things I could disavow, examines the recent emergence in the Arab world of new infrastructure for the visual arts—comprised of art fairs, biennials, museums, and galleries—alongside the geopolitical, economic, and military conflicts that have consumed the region in the past few decades. The exhibition also includes a series of lecture-performances; Raad will perform in MoMA’s Donald B. and Catherine C. Marron Atrium up to five times a week for the duration of the exhibition.

Walid Raad was born in 1967 in Chbanieh, Lebanon. In 1983, he left Beirut for the United States, where he attend ed high school and college. Raad enrolled at the Rochester Institute of Technology , where he studied p hotography and Middle Eastern s tudies and earned his PhD in v isual and c ultural s tudies from the University of Rochester. Raad frequently returns to Leban on, and is deeply involved in the artistic community there. He currently lives in New York, and has been an A ssociate P rofessor of A rt at The Cooper Union since 2002. Recent exhibitions of Raad’s work in Europe have been met with enthusiasm and critical ac colades. Solo exhibitions have been held at Museo Madre, Naples (2014) , Carré d'Art, Nî mes (2014) , the Louvre, Paris (2013) , Hasselblad Foundation, Gothenburg, (2011) , Kunsthalle Zürich (2011) , Whitechapel Gallery, London (2010), and Hamburger Bahnhof, Ber lin (2006)

The exhibition will be accompanied by a fully illustrated 192 - page scholarly publication with a major essay by the exhibition curator E va Respini, and contributions by Fin barr Barry Flood and Walid Raad, that surveys nearly three decades of Raad's practice in a variety of mediums. Essays by the exhibition curator Eva Respini and scholar Finbarr Barry Flood place Raad’s art in the internat ional context of contemporary art making, and a special eighteen - page visual contribution by Raad provides insight into his practice.

Major support is provided by Oya Eczacıbaşı; A. Huda and Samia Farouki; and by Elham and Tony Salamé, Aïshti Foundation Beirut.
With generous funding from Basil and Raghida Rahim; Plurimi Foundation, Maya and Ramzy Rasamny; Rana Sadik and Samer Younis; and an anonymous donor.
Research and travel support was provided by The International Council of The Museum of Modern Art.
MoMA Audio+ is supported by Bloomberg Philanthropies.