Entkettet - Dissolution. this exhibition examines Koker's interrogation of socio-political issues with mixed media and paper works alongside new space-oriented installations. The artist explores the resistance that nature shows towards its destruction and urbanisation. 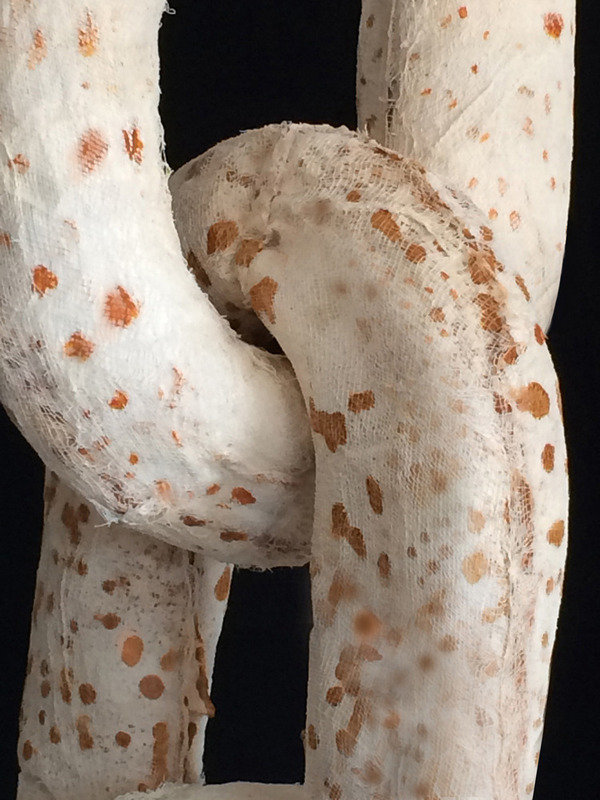 The Elgiz Museum will host one of Turkey's contemporary artists Azade Köker between October 9–January 7. The artist explores the resistance that nature shows towards its destruction and urbanisation. Entitled Entkettet – Dissolution, this exhibition examines Köker's interrogation of socio-political issues with previously unexhibited mixed media and paper works alongside new space-oriented installations.

"The links of the big chain that connect one process to another sometimes come undone, fall to the ground and pile up there. Thoughts lose their flow, the connections between time and space may rupture: all of this may signify an end. But perhaps this end is an end to a routine, to an addiction of a rote.

The flow and continuity of every good thing and all the thraldom and negativity of dependency is as strong as the links of the chain that carries them.

The chain of life and the chain of thraldom. The exhibition Dissolution promotes the questioning of these two opposite formations."

For any (every) artist, the passion that births the creative act ignites in a universe of tensions against reality: whether it is John Constable painting the details of a landscape, or Frank Stella exploring the artmaking process (line + form + color); in each, the reverberations of the real and the imagined, the actual and the idea, the eternal and ephemeral, intermeld someplace in a netherworld both outside and within the work of art.

For Azade Köker, that space is unusually complex, rich in layers both of form and meaning, actual and metaphorical, in works that challenge their viewers, forcing them to question what they see, what they believe, what they know, and even the contexts of their own lives. Hence, just as she layers her photographs, building up her pictorial space both through image and through form, so too does she build waves of metaphor and meaning. Often, she articulates these ideas through her use of an omnipresent skull motif, which parades almost imperceptibly across so many of her photo-collages; they are visible only to the attentive eye, yet deeply crucial and intrinsic to each image. For Köker, the skull is not about death, but rather a symbol that embraces concepts of time (and mortality), of timelessness (and life itself), and, so, the eternity of art. (It is, after all, impossible to overlook the reference here to the skulls of Dutch Master "Vanitas" paintings, which Köker considers an important influence on her own work.) "Two things remain of the human after death," she says. "The skeleton, and the idea."

It would seem fitting, then, that the very physicality of Köker's art so often challenges traditional ideas both of art and of materials (the "skeleton," you might say, of the work of art), and expands the concepts of her media: Are they photographs? Collages? Is a collage of photographs on canvas a two-dimensional work, or—through its textural depth—three-dimensional? Often, too, the artist inserts video into the static surface of her large-scale canvases, introducing new dimensions (again, both literal and figurative) into the art object and into our understanding of it.

And so images fill her images, mist them, hide, appear and reappear. They are the ghosts of old cities, of lost words; they are the faces of political murder victims, martyrs whose killers were never found, embedded into the skeleton of Turkey's Palaces of Justice (Justice Palace, 2014); they fill and form the landscapes, hundreds and hundreds of faceless figures pieced and linked and layered to form a woodland, a desert, a city (Beirut, 2014), places we have been to, places that have never been; they are a silent sea of skulls that fill a forest (Landscape of Silence, 2010)—a collision of industry and nature, the environmental catastrophe that awaits, and the cycle of life and death, a reminder that the only thing truly eternal is ephemerality itself. We are here and not here. The skulls cross our vision, vanish again: the forest covers them, and then is gone.

It is all illusion, made of an intricate collage of photographs across a massive canvas—but, Köker seems to ask us, aren't the photographs illusions too? Is our very perception of the world, which she captures and then recreates, as good a reality as any other? It is such sleights of hand—and of metaphor, of challenges—that make Azade Köker's work far more than simply pretty pictures and aesthetic objects to be admired—though they are this, too. A heavy chain, rusting and massive, drops and coils to the floor: it is the weight of troubles, the weight of slavery, the weight of knowledge, that knowledge which holds imagination and possibility in bondage. But this chain is made merely of gauze and paper. It is light and loose, and the rust is not purely the rust of age and wear, but as well of artifice, bred there by the artist's conscious hand. It emerges as a collaboration between creative forces: of the artist and of nature.

Indeed it is not even, in this respect, a chain at all: it is a sculpture, a play of form and material, something, that is, that both is and is not what you think you see—a chain. Perhaps this is what it binds you to: your own efforts at comprehension, this very human need to make sense of things, even where—as in art—there is no sense, and no need for there to be.

This, maybe, more than anything, defines the essence of Köker's art: nothing is what it seems to be. A photograph of an apple (The Apple, 2011) is not in fact a photograph of an apple. It is cut and reassembled, the artist remaking the apple that is not an apple, constructed entirely of color and of paper—the artist's tools—and in so doing, remaking the creation myth completely. Eve has become the creator here, and the apple (as artwork), immortal, the very embodiment, in fact, of immortality.

And so the artist becomes the ultimate creator, the forger of a new reality that is both tangible in the (art) object and forever beyond touch, captured in her vision, the ideal held only in her imagination: "They appear 'real,' but they are not real: they embody only my impression of things."

In sharing these impressions, Azade Köker generously invites us into her reality; but more, she invites us to question the impressions that we too carry, to challenge and reconsider what we see—or think we see—surrounding us—and so, perhaps, to recreate our own.