Taking place over a five-day period, special guests host an evenings of music and DJs. Zhang Ding covers the room with reflective surfaces, suspended sound panels and a series of rotating sculptures. Contemporary an exhibition of unseen photographs by Smiler (aka Mark Cawson) of London squats from the late 1970s, 1980s and early 1990s. 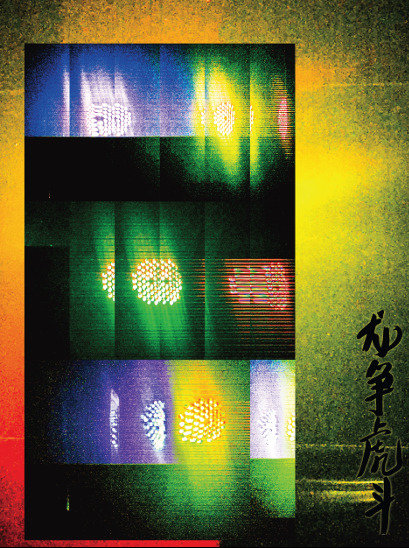 The installation directly references the final scene from the seminal Bruce Lee film Enter the Dragon (1973). Considered to be one of the greatest Chinese martial arts films of all time, it was the first to have been produced by a major Hollywood studio under the guidance of Lee, whose contribution to the production of the film and script was extensive. Lee identified the film as a vehicle to illustrate his understanding of Eastern philosophies to Western audiences. It proved to be his final film appearance before his premature death. The performances, as part of the project, aim to be co-operative, improvisational, experimental and self-reflective rather than competitive, seeking to reflect the philosophies that Bruce Lee sought to express in the film.

Zhang Ding transforms the ICA Theatre into a ‘mutating sound sculpture’, covering the room with reflective surfaces, suspended sound panels and a series of rotating mirrored sculptures situated next to two music stages. For the duration of the exhibition, there are a series of daily performances, consisting of invited artists and open submissions from a variety of musical genres selected by Zhang Ding in association with NTS Radio. The performances seeks to activate the installation to create a platform for co-operative improvisation, experimentation and self-reflection.

Please be aware that each of the performances will contain strobe effect lighting which may affect those who are susceptible to photosensitive epilepsy.

Please note that filming and photography will take place throughout this event and therefore by entering you are giving consent to be filmed or photographed.

Endgame is part of the Bala Club collective alongside Blaze Kidd, Uli-K and Kamixlo. His work picks rhythmic threads through disparate club influences, and is showcased regularly on his bi-weekly show on NTS, Precious Metals. Endgame’s productions utilise a militant sound palette, taking the melodic ennui of grime at its most melancholy, marrying it with party-ready dancehall and hip-hop. His debut EP was picked up earlier this year by Portugal-based label Golden Mist, and there’s already another on the way for 2015.

Neana and Riz Fresco hail from the Gang Fatale crew, who dedicate their time to stirring up dance floors over with pure, club-focused, rhythmic minimalism. It’s a cultured sound, where US ballroom house meets Jersey and B’more club, distorted through the grimey lens of UK soundsystem culture. Gang Fatale showcase the best of their efforts each month with a slot on NTS Radio, and all their releases are available through bandcamp.

Brixton-based Kamixlo hails from Chile, but has been smashing parties across London for the past few years. Alongside his prolific DJing schedule, where he’s been spearheading nights like Tropical Waste and Endless, his productions have been pricking ears and turning heads. Genre-dismantling tracks like Contigo and Mata Lo pay homage to club music from across the globe, owing as much to the tresillo rhythms of Latin America as they do to DJ Mustard’s innovations in the West Coast ratchet sound. With a debut EP on the way, Kamixlo can only be on the up.

An exhibition of unseen photographs by Smiler (aka Mark Cawson) of London squats from the late 1970s, 1980s and early 1990s. The content of the exhibition focuses on a body of work that Smiler mainly shot between West London and Kings Cross. The exhibition consists of black and white images taken on an analogue camera.

“I used the camera like a storm anchor helping me to navigate and freeze a spinning world of change and flux.” Smiler

Against the backdrop of social and political upheaval, young people across the city were drawn to squats by the prospect of a place to live, but also by an identity and a sense of community. Smiler’s photographs document the people who lived in squats across the city, at a time when salvage culture was the norm. Moving from one community to another, between postcodes, Smiler captures a city in transition and documented people he met while himself “trying to manage a deep sense of alienation”. Entire streets of condemned housing sat empty across the city throughout the period - a situation that facilitated large communities to form in places such as Cromer St, the School House in Hammersmith and Queen's Gate.

Photography provided the perfect medium to capture the culture and community of these squat locations. Taking pictures, collecting photo-booth pictures and hanging on to found ephemera enabled Smiler to do this. His photographs reveal intimate moments of the squatters’ everyday life, from portraits that show snapshots of the creative identities and unabashed sexuality of his friends, to images that illuminate how they, as outcasts, experienced city life, capturing the rebellious and chaotic spirit of the time.

Drugs and squatting went hand in hand but music and art also attracted people. This was the time when Rock Against Racism was prevalent and The Clash played a high profile RAR gig in Victoria Park. DIY culture was a way of life before corporate culture and branding subsumed. Political movements shared spaces with artists, bikers, musicians, drug dealers and prostitutes.

With the housing crisis dominating the headlines today, this exhibition serves as timely reminder of how the city has transformed and poses questions about the direction it is taking. Smiler’s compelling photographs are a lens on London as a hotbed of rebellious anti-establishment sentiment and brings into focus how dramatically different the city feels today.

The ICA Fox Reading Room was made possible by the generous support of the Edwin Fox Foundation.

The ICA partners with Frieze Art Fair and K11 Art Foundation to host London’s first official Frieze ICA Bar. Taking place over a five-day period, special guests host an evening of music and DJs in collaboration with NTS Radio. The bar is open 7.30pm - 1am every day.

Institute of Contemporary Arts
The Mall London SW1Y 5AH
During the Frieze ICA Bar programme, entry to the ICA will be free after 6pm. From 11am – 6pm the standard £1 Day Membership will be charged.