In "Le Miroir Vivant" 50 paintings, sculptures, photographs and installations by different international artists, establish connections to one another and to Magritte's masterpiece. "From Bosch to Bruegel - Uncovering Everyday Life" presents paintings and prints from the 16th century. 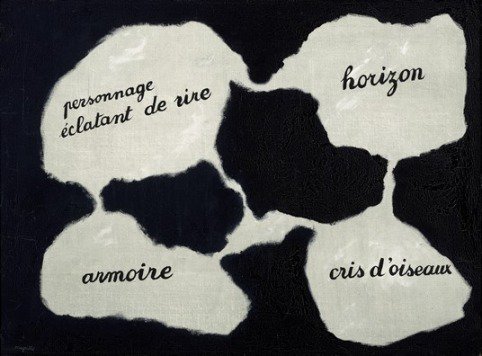 The museum is currently making every effort to purchase ‘Le miroir vivant’ of 1928 by René Magritte (1898-1967). The painting would be a splendid addition to the museum’s world-famous collection of Surrealist art. The museum has until the end of the year to raise the final €120,000 – there is a donation box in the gallery. This early work by Magritte is the key image in an exhibition especially designed around it.
The Living Mirror

‘Le miroir vivant’ is one of a group of more than forty word and image paintings that Magritte made in the early years of his career. In ‘Le miroir vivant’ four interconnected cloudlike white shapes each feature a short, enigmatic text. The words ‘personnage éclatant de rire’ (person roaring with laughter), ‘armoire’ (closet), ‘horizon’ and ‘cris d’oiseaux’ (birds’ cries) evoke countless associations. Yet the relationship between the words and the meaning of this distinctly non-figurative painting remain difficult to fathom. Rarely does a painting from those early years come on to the market. The work would be a major addition to the later, better-known works by Magritte already in the collection, and it would act as a bridge between Dadaism, Surrealism and Pop Art – artistic trends that are well represented in the museum’s collection.
Unorthodox Collection Presentation

In the vivid green and bright orange exhibition space Magritte’s word and image painting ‘Le miroir vivant’ is pivotal. Curator of contemporary art Francesco Stocchi and American artist Alex da Corte worked in partnership on the exhibition. They see Magritte’s painting as a starting point from which stories flow. In two room texts they hint at what the stories can be, but above all they want visitors to make associations and discover their own stories. Fifty paintings, sculptures, photographs and installations by such artists as Jim Shaw, Dan Flavin, Francis Picabia, Barbara Hepworth, Gilbert & George, Duane Hanson and Krijn de Koning establish artistic connections between their works as they relate to one another and to Magritte’s masterpiece.

The following funds have already promised to contribute towards the purchase of the painting:
De Vereniging Rembrandt, thanks in part to the Dura Kunstfonds, Fonds Willem van Rede, Stichting Museum Boijmans Van Beuningen, BankGiro Loterij, Mondriaan Fonds, VSBfonds, and the Prins Bernhard Cultuurfonds.

The three generations of artists beginning with Hieronymus Bosch and ending with Pieter Bruegel the Elder brought about a veritable artistic revolution. 'From Bosch to Bruegel – Uncovering Everyday Life', the museum’s major exhibition for the autumn of 2015, presents paintings and prints that make a mockery of respectability. This is the first exhibition ever devoted to masterpieces of genre painting from the sixteenth century.

Welcome to a world of lecherous pensioners, randy monks, vomiting peasants, penniless beggars, fraudulent dentists, avaricious tax collectors and fools. The exhibition ‘From Bosch to Bruegel’ brings together ‘politically incorrect’ paintings and prints of the highest standard. Approximately forty sixteenth-century paintings and a similar number of prints will be brought to Rotterdam from important museums and private collections. In the autumn of 2015 Museum Boijmans Van Beuningen presents the first ever exhibition devoted to sixteenth-century genre scenes, a radical departure from the traditions of religious art and portraiture. Everyday life provided a new source of inspiration. In addition to paintings and prints, the exhibition will include manuscripts and other objects. Curators Peter van der Coelen and Friso Lammertse are in agreement: “You can’t look at Bruegel without a least a smile on your face. And that was true for his contemporaries too.”

Dream come true
For Museum Boijmans Van Beuningen, the exhibition is a dream come true. Lammertse: “Any exhibition with works by Pieter Bruegel the Elder poses huge challenges. His oeuvre is extremely small and museums hardly ever lend their fragile panel paintings. Museum Boijmans Van Beuningen has four paintings by Hieronymus Bosch and a panel by Pieter Bruegel the Elder in its collection. We have already secured a loan of another Bruegel, which is an important step towards realising this exhibition, which will also include masterpieces by Quinten Massys, Lucas van Leyden, Pieter Aertsen, Jan Sanders van Hemessen and Marten van Cleve.

History
For centuries, panel paintings depicted only religious scenes or portraits. Around 1500, however, there was a remarkable change: painters began to turn their attention to scenes of everyday life. But their choice of subject matter was highly selective. Rather than depicting pious, hardworking citizens, they painted quack surgeons, drunkards and beggars. Most scenes are satirical, with visual jokes about sex, miserliness and alcoholism: subjects that still resonate today. Even if there is a clear moral lesson, comedy always dominates. Yet the quality of these works is extremely high; they are among the masterpieces of early painting. Bosch, Bruegel and lesser-known painters such as Jan Sanders van Hemessen were true masters with virtuoso technique.

Pioneers of genre painting
Hieronymus Bosch is the first artist who we know painted scenes of this kind, though only a few have survived. ‘The Pedlar’ in the collection of Museum Boijmans Van Beuningen is the most famous, showing a vagabond with a brothel in the background. Lucas van Leyden was the other pioneer of genre painting, with depictions of fortune-tellers and people playing cards or chess. Quinten Massys skilfully painted love and money (read: lust and greed). Jan Massys, Jan Sanders van Hemessen, Marinus van Reymerswaele, Jan Provoost, Ambrosius Benson and the anonymous Brunswick Monogrammist followed in their footsteps. Pieter Aertsen painted peasants eating and drinking even before Pieter Bruegel, whose scenes of peasant feasts and musicians are among the highpoints of European art history. Bruegel’s works conclude the exhibition and also the period of the pioneers of genre painting.

Follow-up
The work of the seventeenth-century Dutch genre painters is well documented and frequently exhibited. These artists based their works primarily on examples by their sixteenth-century predecessors. Strangely enough, the pioneering work from the early period from Bosch to Bruegel remains relatively unknown. The exhibition ‘Images of Erasmus’ in 2008 focussed on the contribution of the generation of Bosch, Lucas van Leyden and Massys in the section ‘In Praise of Folly’. This major survey next autumn is the museum’s long-awaited follow-up. It will be accompanied by a richly illustrated catalogue and an extensive programme of lectures and activities for young and old alike.