Circa. The exhibition pairs two of the artist's iconic photographic series: Palm Beach Views and Unearthing. For this occasion, Burr will also recreate his second "earthwork" Circa '77, and a new works consisting of plates of steel, varying in size and shape. 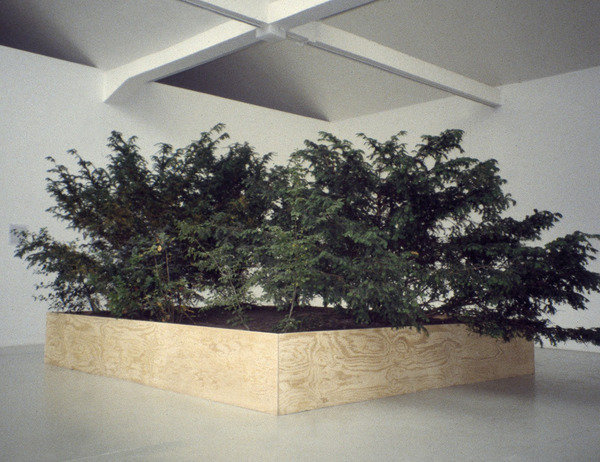 Bortolami Gallery is pleased to announce Circa, an exhibition of Tom Burr presenting both works from the 1990s and new works.

Tom Burr’s work interrogates intimacy and what lies at the intersection of public and private. The exhibition will pair two of the artist’s iconic photographic series. Palm Beach Views defines private properties in terms of non-public spaces while Unearthing the public restrooms explores liminal spaces where desire could be satisfied, although clandestinely. Driven by an archeological interest, Tom Burr archived public restrooms in playgrounds and parks as a testament to the disappearance of cruising grounds, in the process of being closed by the city.

For this exhibition, Burr will also recreate his second “earthwork” Circa ’77. Installed initially at the Kunsthalle Zürich in 1995, this piece recreates to scale a section of the Platzspitz, a riverside park flanking the Swiss National Museum in Zürich, as it might have looked circa 1977. During that period the park was unpopular with the general public, its dim lighting and dense vegetation limiting visibility and creating areas of isolation. Gay men actively invested in the park, modifying its topography to create new zones for meeting. This is the period that just preceded the Platzspitz’s infamous use as a needle park in the 1980s, which later prompted the massive clean up of the area in the mid 1990s. It is this clean up of the park that prompted Burr’s work.

In the second room, the artist will present Grips, a new body of work consisting of plates of steel, varying in size and shape. Some of these plates are secured onto the surface of others, while some feature printed information, and enact a play between raw and finished surfaces. All will repose on a ledge installed a foot off the ground, with the plates framing, overlapping and reflecting one another. Their levitation annuls the threat their weight poses. The distribution of the plates in the space redefines the structural lines of the room while their familiar scale evokes both bodily and architectural form. Through their form and imagery, the works in Grips explore this specific material, the body, the artist and audience, and the various manifestations of being held tightly in place.

A brochure will be published in conjuction with the exhibition featuring a critical text by Alex Kitnick.

Tom Burr (b. 1963 in New Haven, Connecticut) lives and works in New York. He has shown extensively throughout Europe and the United States. Current projects include to expose, to show, to demonstrate, to inform, to offer, a group exhibition at MuMOK in Vienna, Austria. His most recent exhibitions include a major large-scale site specific work commissioned on the occasion Köln Skulptur #8 in Köln, Germany and a public installation for Lustwarande ’15 in Tilburg, Netherlands. Concurrently to this exhibition, an anthology of the artist’s writings will be published by Sternberg Press in collaboration with the Frac Champagne-Ardenne, France. Burr attended the Whitney Independent Study Program and the School of Visual Arts in New York.

For more information and images, please contact Clément Delépine at +1-212-727-2050 or clement@bortolamigallery.com