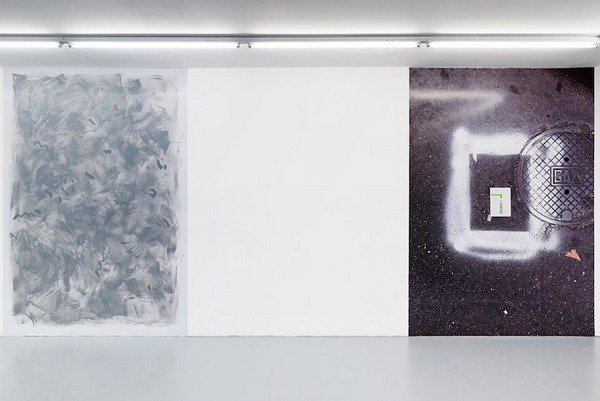 Clement Rodzielski's work is marked by an attention to images, their modes of material and immaterial appearance as well as the uses and exchanges they depend on. With diverse actions (printing, isolating, enlarging, cutting, duplicating, spray painting) he explores the different possibilities of objects and pictures as signifiers. His appropriations often involve overlooked or forgotten objects that no longer have a connection with their producer or owner.
Rodzielski's exhibition draws upon counterfeit tobacco as a found material, participating in its circulation while also putting an end to it. Carried underneath the large coats of its sellers, fake tobacco is constantly exchanged and its legal and economic status negotiated. With this series of works Rodzielski accentuates this exchange: the cigarettes are opened, emptied and poured into the picture plane. Trapped inside each of the works in the exhibition, the material of tobacco continues its constant flow of motion into painting, changing its use-value entirely.

The display will feature a prolific set of works on paper that are in direct relation to the paintings’ process of production. The paintings adhere to a pre-considered palette of colours given by the different shades of tobacco itself, except for one colour that is arbitrarily chosen. Brushstrokes are dispersed throughout the wooden support, in the fashion of an interior pattern from a Nabis' private setting, wherein painting becomes hidden, dissolving into the decorative background. The works on paper on the other hand, emerge as the paintings’ counterpart, dictating their own array of colours and revealing their layered process. Both mediums adopt a Trojan horse strategy; while at first look they seem to follow the conventions of abstraction, they hide Painting's potential function as a vehicle.

Ambiguously placed in the staircase, Rodzielski's work on cardboard follows the ephemeral palette of a counterfeit bill detector marker. Applied in an arabesque gesture, the marker leaves a trace of changing colours on the paper until its final disappearance. Imitating these marks in acrylic tones with minimal strokes, the works continue the same movement as the paintings, between the aleatory and the regulated nature of colour.