The exhibition's focus on figurative art reflects the history of the collection and the interests of Bardi and Lina Bo Bardi. In the context of the promotion of geometric abstraction by the US through its Good Neighbor policy during the Cold War, they were wary of its potentially depoliticizing effects. 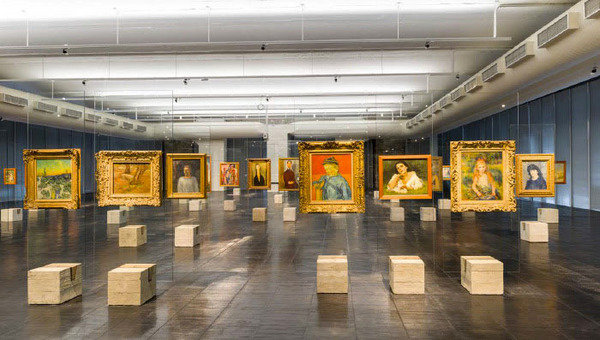 MASP announces the return of Lina Bo Bardi's radical glass easels to the display of the collection beginning December 10, 2015. Picture Gallery in Transformation presents a selection of 119 artworks drawn from the museum's diverse holdings, spanning from 4 BC to 2008. The easels were first presented at the opening of the museum's current venue on Avenida Paulista in 1968, and were withdrawn in 1996.

Founded in 1947 by Brazilian media mogul Assis Chateaubriand (1892–1968) and Italian art critic and dealer Pietro Maria Bardi (1900–99), the museum houses the most significant collection of European art in the Southern Hemisphere, as well as art from Africa, Asia and the Americas. Since its inception, Lina Bo Bardi (1914–92) worked on the architecture of the museum, subverting traditional approaches to exhibition design.

The return of the glass easels is not a fetishistic or nostalgic gesture towards an iconic exhibition display, but should rather be understood as part of a programmatic revision of Bo Bardi's spatial and conceptual contributions to museum practice. The political dimension of Bo Bardi's proposals is suggested by the open, transparent, fluid, and permeable picture gallery—one that offers multiple possibilities for access and reading, eliminates hierarchies, predetermined paths, and challenges canonical art-historical narratives. The gesture of taking the works off the wall and placing them on the easels points towards their desacralization, rendering them more familiar to the public. In this context, the museum experience becomes more humane, plural, and democratic.

In the original configuration of the glass-easel display, Bo Bardi and Bardi organized the works by artistic schools or regions. Now they will be placed in strict chronological order, laid out in a meandering path. Such organization does not coincide with the chronology of art history, with its schools, movements and territories, nor does it condition the public to follow this course, as the spatial transparency of the open floor plan and the easels invites visitors to construct their own path. In addition, Picture Gallery in Transformation is a semi-permanent collection display, as it will remain open to frequent changes, adjustments and modifications, some already planned for early 2016.

The exhibition's focus on figurative art reflects the history of the collection and the interests of Bardi and Bo Bardi. In the context of the promotion of geometric abstraction by the US through its Good Neighbor policy during the Cold War, they were wary of its potentially depoliticizing effects.

Picture Gallery in Transformation is organized by artistic director Adriano Pedrosa and curators Fernando Oliva, Luiza Proença, and Tomás Toledo. It has been generously supported by Banco Bradesco.