The infinitely variable ideal of the popular. The exhibition brings together a selection of installations, videos, photographs and posters. His production refers to the political and social circumstances specific to contemporary life, while presenting a critical vision of the art system and circuit. 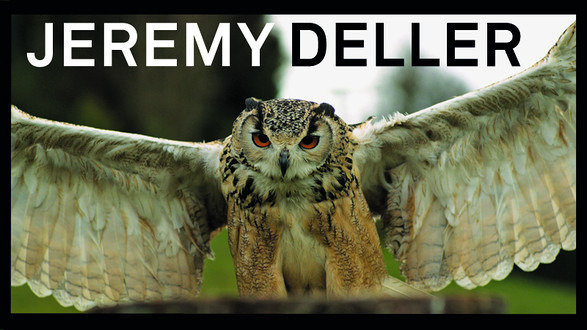 From Saturday, December 26 through March 2016, Fundación Proa presents the first exhibition in Argentina by artist Jeremy Deller: The infinitely variable ideal of the popular. A selection of the artist's work will span the range of his practice, from the 1990s to the present day. Deller is the winner of the 2004 Turner Prize and the 2010 Albert Medal of the Royal Society for the Encouragement of Arts, Manufactures and Commerce (RSA). Throughout his career, he has worked in a variety of artistic disciplines, including photography, video art, and installation, and has revived a Pop—or "popular"—aesthetic in each of his projects. Many such pieces are included in the exhibition, offering a distinctive overview of his artistic vision.

Deller's critical reflection on English culture (its historical contradictions and politics, as well as its identity as a post-industrial and multicultural society) provides a global analysis that traverses both time and borders. As the artist states: "I am careful not to reveal my own opinions too forcefully. Obviously, in composing an artwork, you do reveal something, but I do not want to make a political work in the same way an activist would. I want to grant it a bit more poetry, a bit more space, so that the public can get involved... I want to leave a little room for thought and not tell the viewers what to think."

Historical events appear, for example, in Deller's The Battle of Orgreave, which reenacts the struggle of British miners and their confrontation with police forces in the 1980s, or in his video on Adrian Street, which portrays a British miner who became a transvestite wrestler. In the curators' words: "If Deller's work takes shape as a multifaceted process of investigation, it is because it belongs to the rich history of the observers, critics, and thinkers of industrial society."

The sequences and dialogues between videos, period posters, and references to the ludic in English Magic, as well as depictions of Deller's childhood bathroom, provide the exhibition with a panorama of juxtaposed artistic languages, which speak to the multiplicity of images and the diverse practices involved in contemporary art.